As part of Hvar’s Advent celebrations, everyone was invited to visit the Arsenal Theatre to see how the restoration works are progressing. It’s been closed for performances since the 2004 season, so we’re talking about a 14 year project so far, now hopefully coming to a successful conclusion, with a grand opening possibly in the Spring of 2019. Really excited about that, as it should include regular art exhibitions in the gallery, also on the same floor.

So what’s been going in there, and why is this little theatre so deserving of all that painstaking work? Let’s take that in reverse order, and look back to the 17th century, when it was first opened. At the time, theatres around Europe were all privately owned and operated. But following years of feuding between Hvar’s nobles and commoners, it was decided to improve relations by building a publicly-funded theatre, which could be incorporated into the reconstruction of the Arsenal building. That had been seriously damaged in the 1571 attack by the Turkish fleet, and again in 1579 when the gunpowder magazine of the fortress was hit by lightning – just as renovation work was underway! New plans included strengthening arches, a fontik (granary) with a belvedere (terrace), giving entrance to an upper floor in which the theatre was to be built. 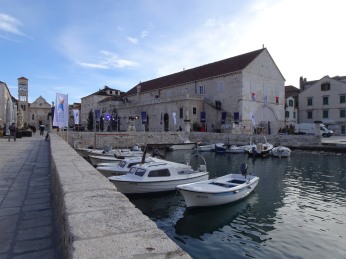 Arsenal on the waterfront

Completed in 1612 by the Hvar commune during the reign of Prince Pietro Semitecolo, the theatre provided a space for everyone to enjoy cultural and social events, and was the first publicly-owned theatre in Europe. The inscription above the entrance from the belvedere carries the inscription: ANNO SECVNDO PACIS MDCLXII, that is, the second year of the peace 1612. It was at a time when Hvar was one of the literary centres in Dalmatia, with Hanibal Lucić starting to write the first secular plays in the Croatian language. 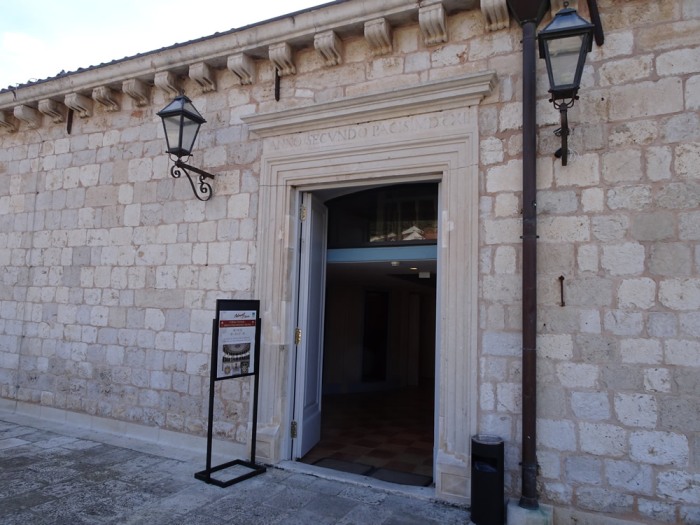 The Theatre of Hvar is currently the third oldest in Europe, after the Teatro Olimpico in Vicenza (1585) and the Teatro all’antica in Sabbioneta (1588). None of the previous medieval playhouses (for example in Spain, Paris and London) are still standing, and certainly not still operating as theatres, an impressive achievement after 400 years. Whereas the two Italian theatres retain their original format, the Hvar theatre, at least on the inside, reflects the changes in theatre design through the ages.

View from the centre box

The original stage would have been larger, reaching forward to the second box. Most of those boxes are a later addition, from the 1803 renovation following an occupation by the military. A group of concerned Hvar citizens called the Theatre Association funded and organized a restructure in what was then the modern configuration. Further renovations in the mid-19th century give the theatre its current neo-Baroque style.

On the back wall of the stage is an original set design dating from 1819, painted by master Petar Galasso in preparation for the Carnival season. It was plastered over around 1900, and repainted by Nikola Marchi, with a scene representing the Duke’s palace. The over-painting has been carefully strapped and removed for restoration and is now mounted on large mobile boards. Meanwhile, the underlying painting had to be preserved from encroaching damp and damaging salts, then cleaned and protected. As far as possible, the restoration team have kept the appearance, using a dotted format to fill in missing sections so as to distinguish them from the original artwork.

Also as part of the current renovations, the painting on the ceiling has been carefully preserved and reconstructed as necessary. It was in pretty bad shape before, with sections having fallen down and others parting company from the lathe and plaster that filled the space between beams, some of which would need to be replaced anyway. So the entire ceiling was strapped up and covered with a protective coat just to get the stabilisation work completed. With all that complication, I start to see why this project has taken so many years!

The Coordinator of the project for the City of Hvar is Ita Pavičić, and she was on hand during the Open Day to show everyone around and explain the various features still in progress. Under the stage are two dressing rooms for the performers, and for the first time in the history of the theatre, toilets! And behind the auditorium, we have the same for the patrons! The artistic restoration work was carried out by the Split Conservation Department of the Croatian Conservation Institute. 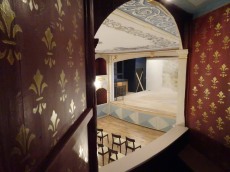 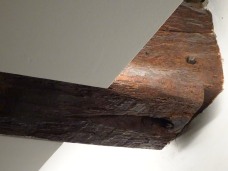 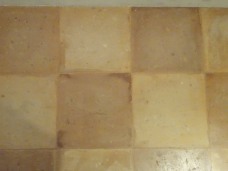 To the upper floor

Everything about this theatre is compact, from the stage to the closeness of the audience to the action, and the rather snug dimensions of the boxes. It makes for a very intimate atmosphere, and it’s said that many actors and performers really enjoyed playing here. It’s been at the centre of cultural life of Hvar for 400 years now, and we’re all happy to think that it will re-open again soon!

Perspective is a European-wide organization of historically and architecturally important theatres, of which the Hvar theatre is one. Check out the website of European Route of Historic Theatres (ERHT) – Adriatic route

Brochures on the restoration: click on the pictures for the PDF files… 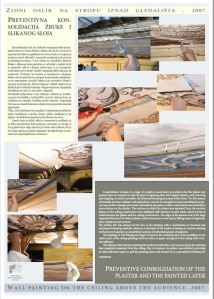