Beaujolais nouveau is, for many of us, the only young wine we know – that is, one bottled and sold immediately after fermentation, only a few weeks after harvest. The process is careful to preserve the fruit characteristics, but not the bitter tannins, giving a wine light in taste, with flavours of red fruit, slightly tart. While Beaujolais had a long tradition of producing a vin de l’année to celebrate the end of the harvest, it wasn’t really until 1951 Beaujolais nouveau got going as a national, then international marketing phenomenon. They now make a big party of it all over France, with the current year’s vin de primeurs being released for sale on the third Thursday of November amid much celebration and marketing hype!

Following the commercial success in Beaujolais, other parts of France began producing their own primeur wines, so in Italy we have Vino novello, in Spain Vino nuevo, and in Croatia, Mlado vino. These young wines come in white, rosé and red, tend to be light and fruity in character, and low in tannins. Alcohol is usually 12% or below, and the wine needs to be drunk within a few months. In Italy, tradition says the last day to consume young wine is “I Giorni della Merla”, the days of the blackbird, said to be the coldest day of the year (29–31 January).

It’s long been a custom in northern Croatia to celebrate St Martin’s day, 11 November with special events in which mlado vino (young wine) is drunk as soon as it has finished fermenting. It wouldn’t be bottled, but served locally in jugs direct from the tank. Originally mlado vino was white, but given the growing popularity of Beaujolais nouveau in France, in the 1990s Croatian winemakers also experimented with Portugizac, a red grape that was naturally acidic and low in tannins. It produces an excellent light and fruity young wine that pairs perfectly with autumnal foods such as roast chestnuts, sausages and sauerkraut.

And now there’s also a Dalmatian young wine to enjoy! Carić winery from Hvar have launched their Mlodo 2016, made from young Plavac vines on the southern slopes near Zavala. (Notice the difference a Hvar accent makes to the standard Croatian Mlado!) At a celebration party in Split on 3rd December, we all enjoyed tasting the wine, along with roasted chestnuts, and island specialities: Cviti cakes and handmade chocolates by Udruga Faria. All while listening to the lilting tones of Škuribanda, a ladies’ klapa group from Zadar. The launch was hosted in style in the courtyard of the Split City Museum, the former Papalić Palace. 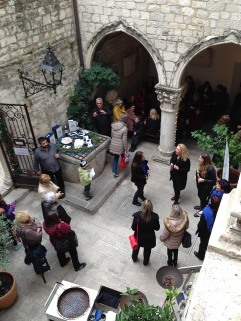 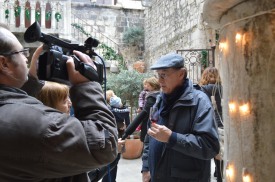 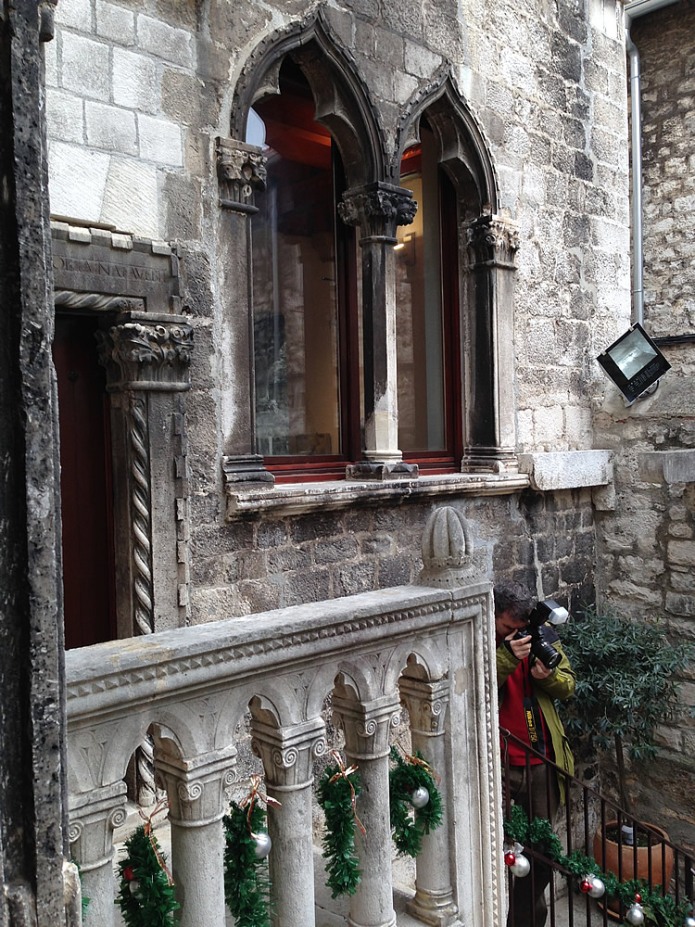 Mlodo has a lively, fruity character and surprisingly subtle tannins for a Hvar south-side Plavac. Alcohol is 13.2%, and it pairs well with autumn/winter foods such as those roast chestnuts and traditional spicy biscuits. On the following night we had a bottle with Thai food, as served in the lovely U Smokve restaurant in Jelsa, and that went down really well!

Hvar TV were documenting the event, chatting with winemaker Ivo Carić, and you’ll also hear the wonderful klapa music and see GoHvar’s own Zdravko talking about the wine!