After finding our way to all the other sites on the Archaeological Paths map provided by the Stari Grad tourist board, we thought it would be a doddle to visit Hum – Sveti Vid. Who needs signposts, anyway? You can see the hill perfectly well, it’s just a matter of working out which path takes you  to the top, right? Well, yes.

At the top of Hum is an Illyrian hilltop settlement with stone mound and fortifications, with the later addition of a small 10th/11th century Christian church. The roof has long gone, but the walls of this pre-romanesque church still stand, showing it to be a fine example of the south Dalmatian style of the time.  It was declared a special site of cultural interest in October 2011 by the Croatian government. (See Total Hvar article) 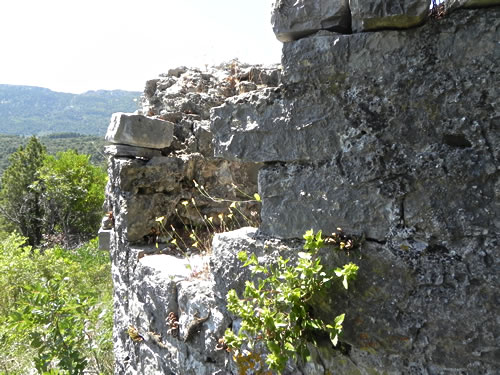 It’s always hard to get a photo of the lizards sunning themselves on the rocks – as you get close they simply disappear into a crack in the rock! I must have caught these two unawares as I stepped round the end of the church to take a photo of the wall – look just below the window and see two wee guys about to shift themselves rapidly. Two seconds later – they’d gone!

Stone mound with view of Vrbanj and Jelsa in the distance

The defensive walls are not as impressive as at Purkin Kuk, nor I believe is the stone mound as large. Hard to tell, though, as nothing has been excavated at Hum.

There is what looks to be the base of a small watchtower, but more medieval than ancient fortress. This would have been a great place to keep an eye on the shipping channel between Brač and Hvar.

View over the Stari Grad Plain and the island of Brač

The views from here are spectacular. Off to the north is the Stari Grad Plain, with all that important agriculture, and the island of Brač, with the shipping channel between. I love the little line of puffy cumulus above Brač, too! 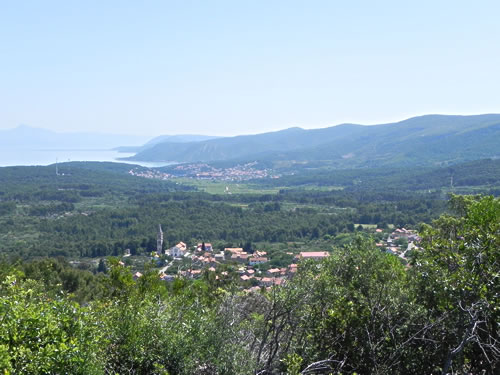 Looking to the east – Vrbanj and Jelsa

Eastwards you can see the line of Hvar stretching into the distance. In the foreground we have the village of Vrbanj, and over on the coast is the town of Jelsa.

To the west you can see the village of Dol (Sv Marija) and the site of Purkin Kuk behind. Now I can see where we walked last week!

Flowers on the path to Hum

Hum (meaning mount) is one of several hills of the name.  Hum-Sv. Vid is the pointy hill between Vrbanj and Dol (Sv Ane). Today, the road from one to the other runs to the north of the hill, but there’s a much older track on the south side. You can walk it, take your donkey on it, possibly bike it if you’re feeling adventurous, but you can’t take your car along it! Access to the hilltop site is from that track, so you need to find it.

We set out from Vrbanj with helpful instructions from someone at the local bar. As the road from Dol turns into Vrbanj, take a right past the municipal rubbish bins and go right towards the “old houses”. Now, they all look like old houses to me, but let’s assume we take the road that goes up between Hum and the hill behind.

That hill behind, by the way, was the site of the biggest bronze/iron age hilltop settlement in the area – Gračišće. It can really only be appreciated from the air, when it’s seen as a large stone ring around a grove of trees. From here, you can see the break in the trees, but no wall. But, back to Hum… 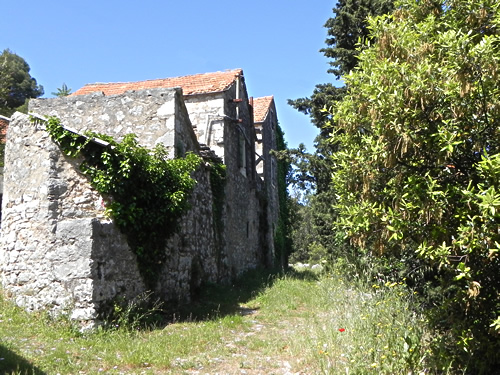 The track to Dol goes past some old houses

At the houses, we asked again and were told, yes, we were on the right track. Look for a path off to the right in 100 metres – you can’t miss it. Famous last words! Unfortunately she failed to mention two previous paths leading off to the right which go into the fields. And this lady also had a very optimistic sense of distance. There are, naturally, no signposts. Everybody knows where the path is, right?

After exploring the two side paths and trying further up the path than instructed, we decided that the path must be seriously overgrown (as the man in the bar had told us), and we struck off uphill trying to follow the least overgrown route. If you can imagine a set of walled terraces covered in forest, that’s what it was like. The fields grew smaller as we climbed, and the walls got higher. It was like climbing a very large set of steps. And a machete would have been handy! Eventually we came on an actual, real path leading upwards – we had cut the corner and found it!

On the way down, of course, it all became clear. We should have kept going on the original track as it became a grassy footpath, then a rocky trail and finally appears to be the top of a wide wall.

Turn right here – the path to the top

Somewhere on the rocky section is that very obvious path leading uphill to the right. She was right, that woman back in the village, you can’t miss it! It was nicely cleared all the way up, and has protective walls on either side. Probably constructed as a processional way for the little church on the top, it makes a nice easy walk. 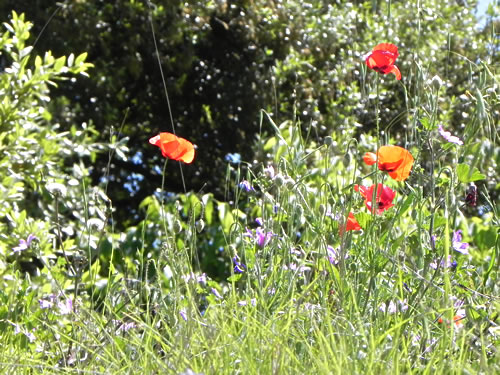 Poppies and other wildflowers next to the trail