Tucked away in a little backstreet of Hvar town is a lovely walled garden. Back in 1530, it was built as the summer residence of Hannibal Lucić, spent a good few years derelict and is now coming back to life as the Hvar Heritage Museum. 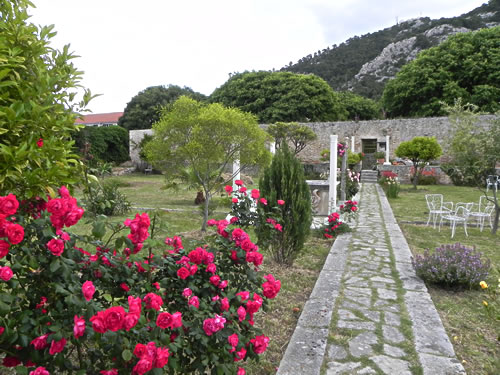 Hanibal Lucić was a lawyer, in charge of local works for the commune. Apparently he kept pretty busy on construction projects such as the franciscan monastery, and travelled to Vis to oversee works there. He inherited this land outside the city walls, and decided to make it into his summer residence. The walls all round it are high, to provide privacy, and possibly for defense.

There are two houses built against the south wall. On the left is the main house, with fancy colonades and ballisters, though as this was only a summer house and would not have been as ornate as his town house.

The upstairs room is open to the public, and has been furnished in a slightly later style. Nothing remains of Hanibal Lucić’s possessions, indeed he refused to produce an itemised will, so little is known. What you can see, though, is the basic design of this room with large windows on three sides – very cool in summer! 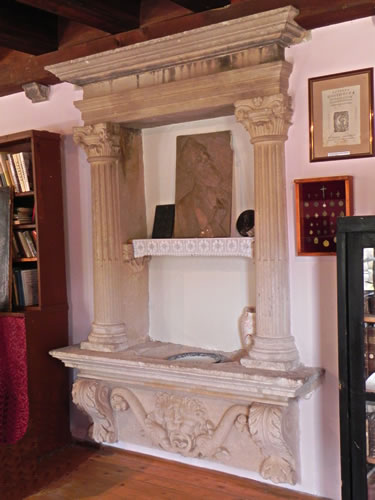 On the back wall of the room is the kind of monumental structure that in houses much further north would be a fireplace. Here, in the Mediterranean climate, we have a shallow wash basin. They know from other examples on the island that on the shelf above would have supported a water tank with taps to allow you to wash your hands in the bowl beneath. 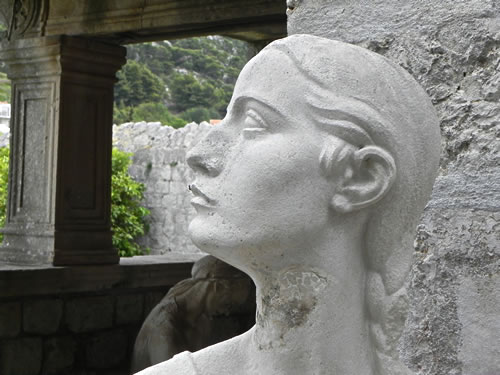 Sheltered under the terrace of the main house are some sculptures by a local 20th century artist Šime Dujnović. He worked in the studio of the great Ivan Meštrović for many years, and this collection of his own work is unfortunately not in brilliant condition, but the figures are strong and have dramatic style. The plan is to restore and/or copy the originals to place in the garden.

In the opposite corner, is the gardener’s house, now a compact set of offices and the hub of the Hvar Heritage Museum. Just outside the door, someone was layering rose petals and sugar in a jar to make rose syrup, while inside, an archaeologist worked at a computer. The interior of this building looks to have been designed by a cabinetmaker for a ship, a masterpiece in design for compact spaces!  The original building had been a complete ruin, and part of it still is. They’re still working out how to use that space.

The garden from the terrace, with Hvar beyond

The whole property was in fairly bad shape when they began their restoration. The gardens had been used as allotments, and the buildings pretty much reduced to ruins. There being, unfortunately, no surviving plans or drawings, renovation work is based on what they find in excavations, or from knowledge of similar properties of the time. They know, for example, that originally the garden had a shaded walkway all round, like a cloister. They’ve found pieces of stone columns. So they’re having new columns made in the original style – the fresh stone looks white in the photo above! 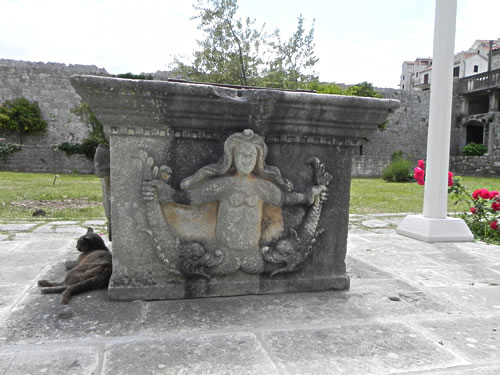 Well with mermaid and cat

In the centre of the garden is a well, making a very suitable snoozing place for the museum’s resident cat. I found the carving of the mermaid interesting – I don’t think I’ve ever seen them do the splits before?! Or has her tail turned into a couple of fish coming back to bite her? I must have missed the fairy tale that explains that one! 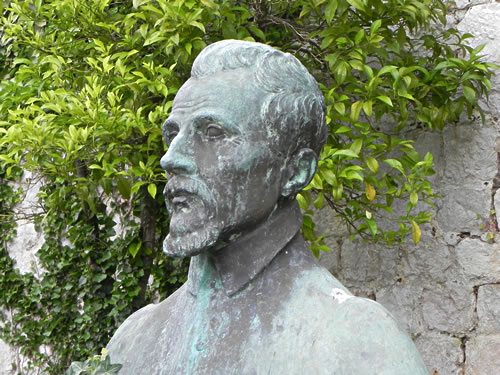 Overseeing the newly blossoming garden is Hanibal Lucić himself in the form of a bust by the sculptor Ivo Kerdić.  Lucić, in addition to his day job as a lawyer, is best known as a poet and playright, one of the leading figures of the Croatian renaissance. His most important surviving work is the play Robinja (the Slave Girl)  the first secular play in the Croatian language, written around half a century before Shakespeare wrote The Tempest.

The Hvar Heritage Museum is open to the public on a kind of informal basis at the moment while they work to prepare for the new season. It was totally delightful to see such care and attention in bringing this garden to life again. One day you’ll be able to see so much more on display here, there are lots of projects and plans afoot for further development. In the meantime, they hold weddings in the garden, and it’s a beautiful peaceful oasis in this otherwise bustling town.

One thought on “A Renaissance Garden in Hvar”