At the far eastern end of Hvar, where it comes closest to the mainland, lies the port of Sućuraj. It’s a good long drive from our place, following the beautiful winding road along the ridge of the island. On the way you get stunning views north to Brač and the mountains of the mainland, and south towards Korčula and the Pelješac peninsula. Sućuraj is best known for two things:- the ferry crossing to the mainland, and Vujnović winery. We’ve taken the ferry a few times, and it was high time we explored the place itself, and the wines.

The first thing to note is that vines have been cultivated in the eastern part of the island, known as Plame, for centuries. We even know the names of the people who were granted land on the cape of St George (Sut Juraj = Sv Juraj) to create vineyards (1432 – Kažota Ozirić; 1458 – Hektor Golubinić, grandfather of Peter Hektorović). The Vujnović family was first mentioned in the records in 1673 and their house is one of the oldest in Sućuraj. There’s a long pedigree of wine-making here! 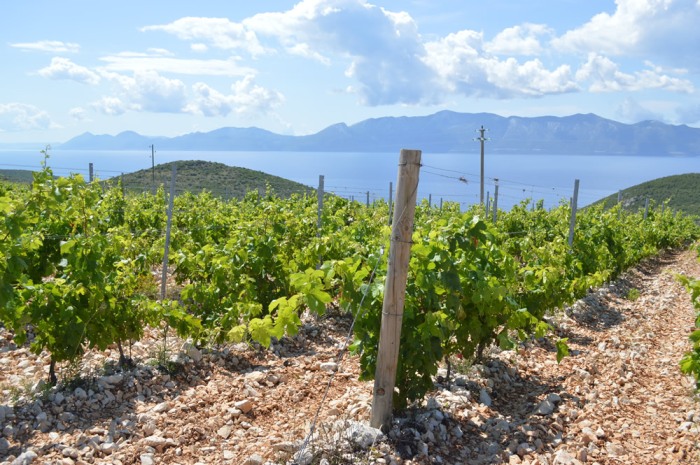 Vineyard with a view!

On the way into Sućuraj we stop at Vujnović’s largest vineyard, created in 2012. It faces south-west, protected by a ridge from the bura, and has spectacular views towards Korčula and the Pelješac peninsula. Here they grow three local Dalmatian varieties: Plavac mali, Pošip and Prč, using only ecological methods with organic fertilizers and no synthetic pesticides. The basis of the vineyard is limestone, which you can see in large heaps, with ancient sea fossils clearly visible in them. In June, this year’s grapes are still young and green, looking very promising.

Juraj Vujnović tells us about the vines 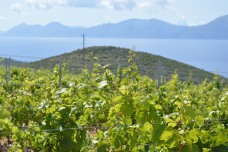 We have two guides for our tour today. One is Juraj Vujnović, the young winemaker taking over the operation of the winery from his father Vjekoslav, and the other is his uncle Nikša, a well-known archaeologist. Together, they have a fascinating fund of knowledge about the area! Driving on into Sućuraj, we assemble around a table in the coolness of the konoba for a glimpse into the distant past. The Vujnović family home was built in the 15th century with a silver coin embedded in the wall in the old traditional manner to bring good fortune. The coin dates from 1441, when the ruler of this area was the Hungarian King Ladislav I. 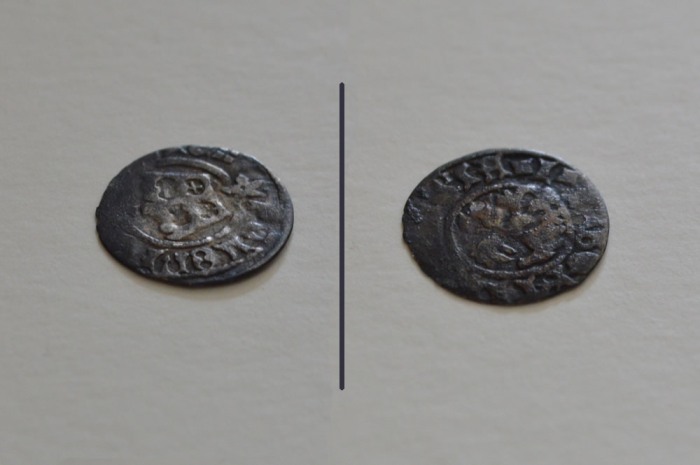 For the past 40 years Nikša Vujnović has been investigating the evidence of human life on the island.  His backpack holds a treasure trove of small fragments that show how early people arrived here, and just how wide their trading connections were. These pieces were found at sites nearby, and although larger, more important finds are held in the Archeological museum in Split, it is fascinating to hear from an expert what these small remnants of daily life can tell us. It’s not often that we’re allowed to touch a piece of impresso pottery from 6,000 BC, and feel the indents put there by some ancient craftsman. 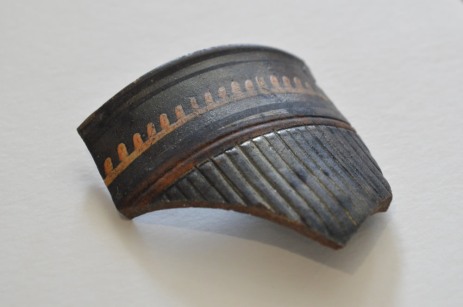 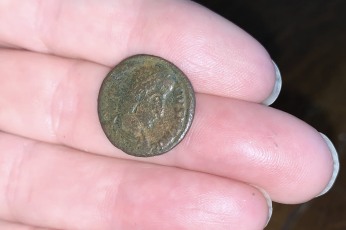 During the last Ice Age, the ancient river Neretva flowed down a valley between Hvar and Korčula. As the ice melted, around 10,000 years ago, the sea level rose and the hills became islands. It’s likely that the earliest people would have lived in the river valley, so sadly much of the evidence of their activities has been submerged. However, there are caves and a few hill-top sites where flakes of stone tools have been found. The original rock had come from the Apulia region of Italy, but the collection of small flakes suggest that the blades were crafted locally. In caves with fresh water, fragments of pottery vessels have been found, these were used for drinking and for storage. In several places, hillforts on the high ground along with their burial grounds are waiting to be excavated to learn more. 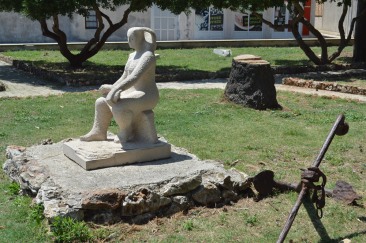 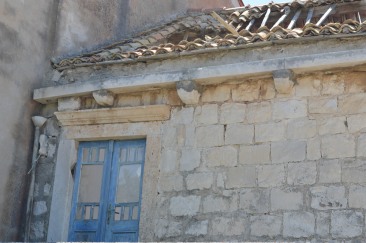 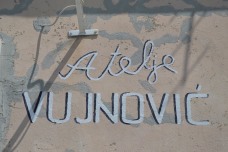 On our walk around Sućuraj with Nikša, we saw how prosperous this little town must have been, once the island was under the protection of the Venetian republic. This was a busy port on the coastal trading route, nicely sheltered and conveniently close to the mainland.  To protect the traders, the Venetians built a fortress here in 1613, with a large watch-tower (sadly bombed in the Second World War).  A house along the street was built  in 1560 by Venetian diplomat and merchant Fabrizio Savarese, whose coat of arms we see above the door. Looking the coat of arms, the bar sinister behind the lion rampant suggests that he was born out of wedlock. 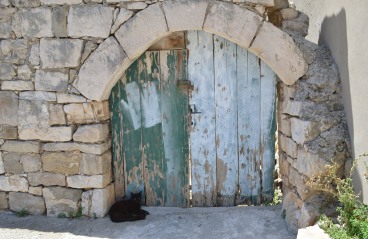 Cat in a doorway 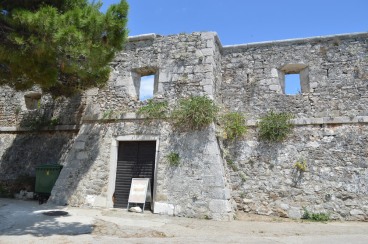 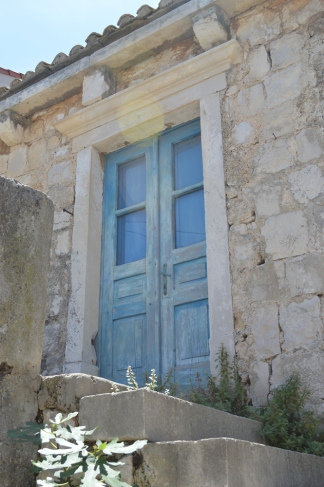 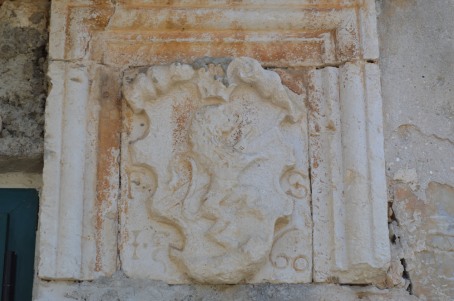 Further along is the monastery of the Order of Saint Augustine, which dates back to the early 14th century. Opposite, is the church of St George, after which this town is named. Not so much the current church, which is a 19th century replacement, but the original one named in the Hvar Statute of 1331 of which only the foundations remain. The old graveyard is still there, with an interesting relief carving of a galley (rather hard to see in the dappled sunlight). Hidden away behind the gate is an inscription in old cyrillic, from an earlier time of refugees from the mainland. 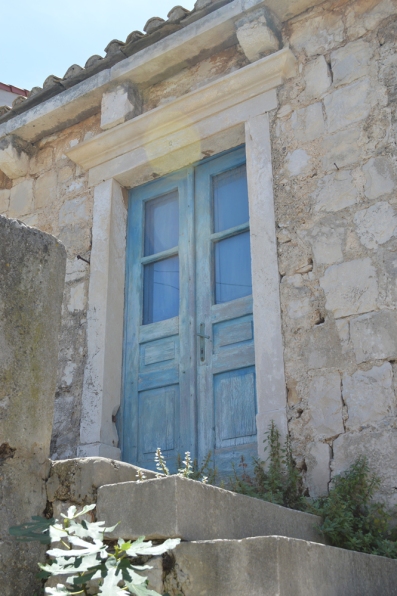 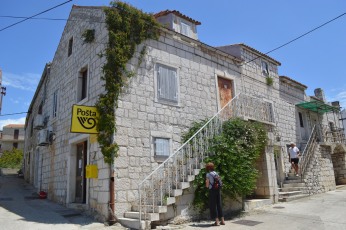 Back at Podrum Vujnović, it’s time for lunch and wine-tasting. By now, the wafting aromas of cooking are making us rather hungry! The food is all locally sourced and prepared by themselves, including a lovely selection of cheese, anchovies and pates to start, followed by a slow-cooked beef pašticada or grilled fish. To finish, we had pancakes with compote of summer fruit. All wonderfully tasty!

And the wines to go with the food… 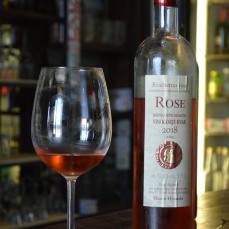 Prč – crisp, citrusy and very drinkable on its own or with food, this variety is indigenous to the Plame area. Once very common, it dwindled a bit after phylloxera hit, and has been brought back by the efforts of Vjekoslav Vujnović, who collected vine shoots from various small vineyards around the area. Prč has a very distinctive aroma and taste, and according to local tradition, is an aphrodisiac. However that might be, it certainly pairs excellently well with appetisers and fish dishes. One of my favourite white Hvar wines.

Pošip – pale yellow with floral aromas and apricots. Vanilla flavours and yellow fruit. Grapes grown in the vineyard near Sućuraj.

Rose – made from Plavac mali grown in the new vineyard we visited. Does not spend long on the skins so the colour is lovely light shade of pink. Light, floral summery wine, very easy to drink.

Plame – made from Plavac mali in the same vineyard. The name refers to the historical name for this part of the island. Dark red. Lovely red fruit, chocolate notes, went superbly well with the cheese and fish. I love this wine!

Ivan Dolac (barrique) is made from Plavac mali grapes grown on the south side of the island. The vineyard there (in Ivan Dolac, as the name suggests) is 350 metres above the sea, on steeply sloping terrain. The wine spends 12 months in oak barrels before being bottled. This is a full-bodied premium red wine, with lovely balanced tannins and complex flavours. I understand it paired really well with the pastičada!

Some of these wines are only available on the island, either at the winery or in some hotels and restaurants in Hvar. We greatly enjoyed our tour of Sućuraj and the Vujnović wines. Many thanks to Juraj, Vjeko and Nikša for sharing their knowledge and making us so welcome. Highly recommended day out!

Walk with an Archaeologist Airbnb Experience

One thought on “A taste of the past and present in Sućuraj: Vujnović winery”