Korčula’s Pjatanca – the annual Spring Food & Wine Festival that takes place at the end of April, offered a fine excuse for a little overnight  expedition to our neighbouring island. Arriving on the morning catamaran, we get all day to explore the old town before the special dinner and wine pairing event, and then all the following day until we catch the evening cat back home. Perfect!

St Marko up the street! 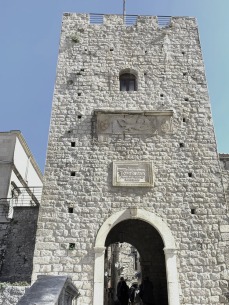 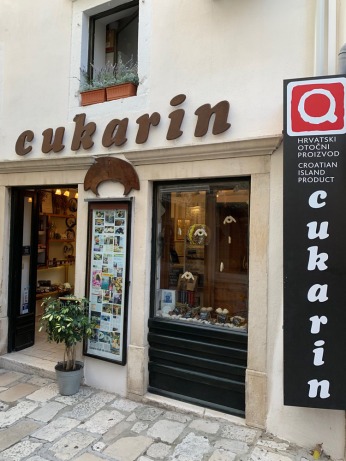 Sv Rok on the wall

In the pre-season, Korčula shows the same tendency as Hvar to have major construction projects causing noise and mess. It’s all part of the preparation for summer visitors, apparently best done at the last minute. So the renaissance Gabrielis Palace that normally houses the town museum is undergoing extensive renovations, and what I guess to be a small part of their collection is on display in a building round the corner. I was interested to see the psephisma, an ancient Greek inscription from the 3rd century BC, detailing the names of the colonists from nearby Vis (Issa), and the agricultural land they received. How incredible to know the names of the farmers from all that time ago! Sadly this is only a copy, with the actual stone fragments held in the Archaological Museum in Zagreb. 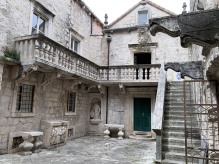 Sculpture of a stonemason by Ivan Jujević Knez

Korčula itself is a planned medieval town, with a proud tradition of stonemasons and boat-builders. As you can imagine, such a commanding position overlooking an important shipping channel brought prosperity and trade.The town streets have been laid out in a herringbone pattern to block the worst of the winter gales, while allowing a cooling breeze in the heat of summer. In springtime, the winds were definitely quite fresh, and we were careful to note which way it was blowing, so we could head in the more sheltered direction! Day 1 we walked westwards along the shore towards the headland with the Sv Nikola monastery. This part of the coast used to be where the boatyards were, back in the day of wooden boats. Still some remnants of that activity to be seen as we walk along. And along on the headland, some beautiful wild irises in flower! 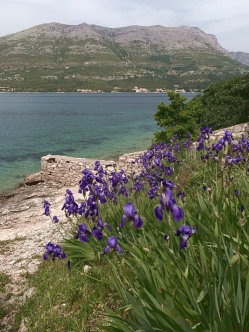 Before dinner, we stopped off in the LoLe Winebar for a little aperitif. Owner Renato Jurjeviċ offers a lovely selection of wines, and small dishes from carefully sourced local produce. We must come back again soon to sample his food!

The “Korčula in a Bottle” dinner was held in the restaurant of the Lešiċ Dimitri Palace, which is a beautiful conversion taking up almost an entire street of old stone Korčulan houses. The restaurant kitchen is presided over by Marko Gajski, who we first met several years back at Divino’s in Hvar, and then again at Perivoj in Split. We were looking forward to tasting the combination of his dishes with the selection of Korčulan wines as chosen by Hvar’s own Master of Wine, Jo Ahearne. She gave us a wonderful set of wines, many of which were new to us. Fantastic evening, really lived up to expectations, especially as Marko substituted fish dishes specially for me, in place of the meat courses. I particularly love his signature Deconstructed Vis Pogača, so tasty and tastefully arranged! 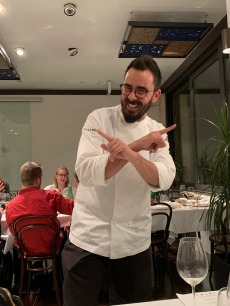 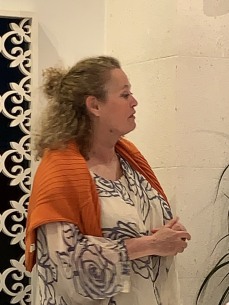 Day 2, and himself was signed up for the Marenda workshop, ever the dedicated gourmet! On the other hand, I got myself a picnic, and set out with my sketch book to explore the eastern shore (downwind). Although the day was bright and sunny, the freshening breeze was somewhat chilly when faced directly. However, in trying to find a way around to the next cove, I found my path blocked by yet more construction – this time extensive roadworks that had taken over the coastal road for several miles. So it was back to the beach with that glorious view, and find a sheltering pine tree! 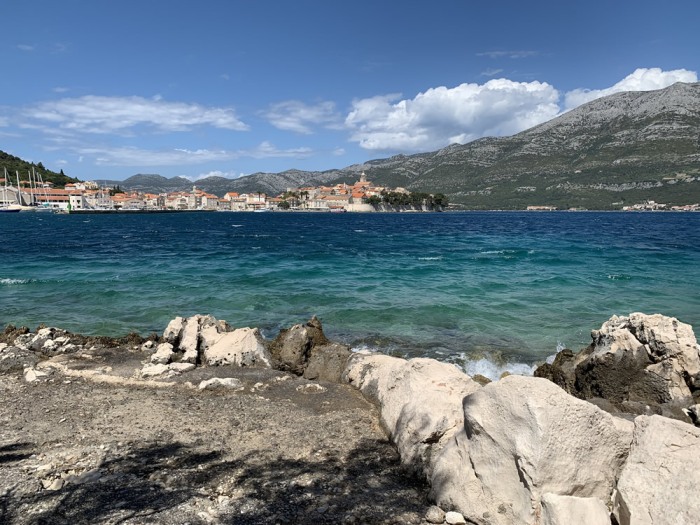 The marenda event at Konoba Radiona was very popular! It was all about the traditional Dalmatian mid-morning meal, for those who rise at dawn and work hard in the fields, or indeed any physical labour. This is not their lunch, which happens later in the afternoon, when work is done. The workshop consisted of tasting various dishes of home-style food that you’d get for marenda, mostly meat, of course. I joined himself later for a glass of wine and to enjoy the dessert. The location was absolutely gorgeous, with a stunning view of Korčula from the terrace.

I’ll leave the descriptions of the food and wine (both dinner and marenda) for a separate blog, and finish with a peek into my sketchbook. Sketched onsite, with watercolours added in the studio afterwards. You can tell one day was much sunnier than the other!

View from our window 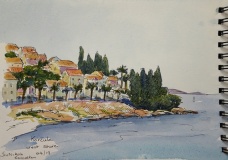 Korčula from the west

Korčula from the east (on a sunnier day!)