Where better to start a visit to Istria than standing on its highest peak, from where you can pretty much see all of the peninsula laid out before you. On a clear day, all the way to the Italian coast!  The coastal range of Učka (1396 m = 4580 ft) is the stunning backdrop for the Opatija riviera, which hugs the foot of the mountain as it plunges steeply down to the sea.

Our hotel, carefully chosen for its views and gourmet menu, was the lovely Draga di Lovrana, set on a promontory halfway up the mountain. The original hotel dates from 1909, when you’d have been navigating the narrow winding road in a horse and cart. Destroyed by fire in 1923, it’s been rebuilt again recently by new owners Sanja and Christian Nikolac with all modern comforts inside the traditional mountain lodge exterior. The views from our balcony, and indeed the restaurant terrace were simply spectacular! 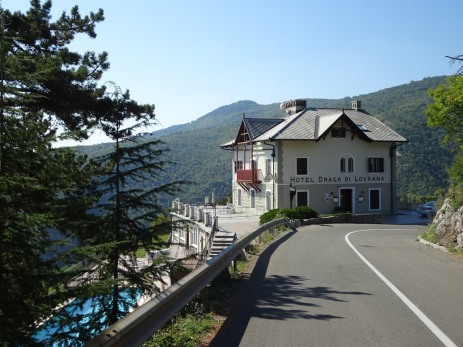 Sunrise on a foggy morning 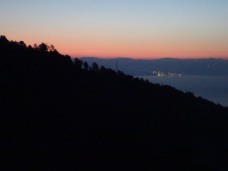 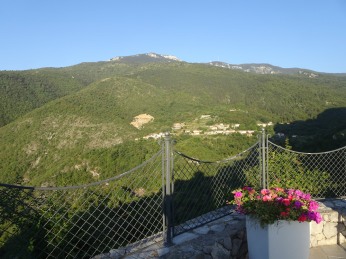 The food here is sublime! Chef Deni Srdoč is a great believer in traditional flavours, beautifully presented with a modern twist. The seafood could not be fresher, caught locally by the Nikolac family fishing boat. We opted for the 7 course gourmet menu (one veggie with fish, one including meat) along with the wine-pairing, for a truly memorable meal overlooking the Kvarner Bay as the sun went down.

Dinner with a view 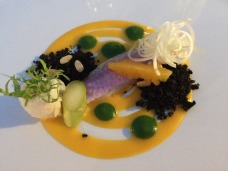 In the morning we set out to walk to the nearby waterfall. The path took us past a grove of sweet chestnuts, for which this area above Lovran is famous.The chestnuts have been grown here for centuries, and are specially bred for their size and sweet taste. Two varieties grow here – branac, which is ready to eat when it falls from the tree, and spoils quickly.  The other – dubenac – ripens later, and is collected in heaps, covered with branches and left to mature for a month, after which it will still be perfect to eat at Christmas. It also appears to be apple country – I wonder if they make cider? 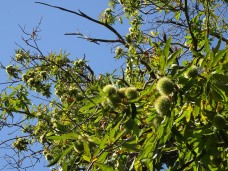 Trudging up alongside the streambed, we could already tell that the waterfall was not going to be at its most dramatic in the late summer. Indeed, when we got there, it was bone dry, except for a remnant of the pool below the falls. On the surface was a small salamander, specific to the Učka region. For a while, we had the place to ourselves, and tried to imagine what it would look like with splashing water. I got my paints out, and tackled the challenge of depicting a dry waterfall. Very zen!

My painting of the (dry) waterfall 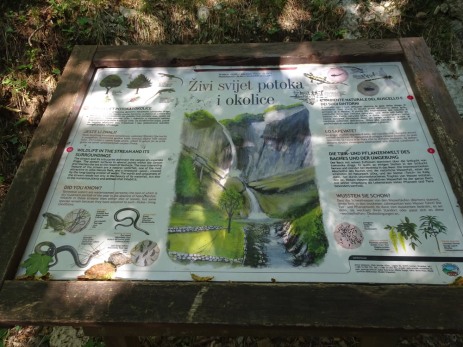 Not even a trickle!

In the afternoon, we drove the tortuous and rather devious road up to Vojak, Mt Učka’s highest peak. To get there, we had to go down to sea-level first, and start up a different route, following Google’s best idea of which “roads” were actually passable by car. We only had one complete fail, having to turn tightly in someone’s backyard to retrace and guess the real road for ourselves! At the top of Vojak is a round tower, originally built in 1911 by the Austrian Touring Club, now the symbol of the Učka Nature Park. Other symbols on Učka that are visible from a considerable distance are the more modern radar installation and radio tower. Along the ridge is a flying ramp, where hang-gliders can jump off to catch the soaring uplifts. Looked pretty scary to me, though himself rather liked the idea! 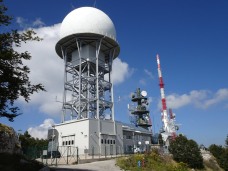 View from the tower

The views are extraordinary, even on a day with building clouds. Around the parapet of the tower are helpful indications in the marble to tell you what is out there, in each direction.It even mentions Venice, which sadly was lost in the haze of distance for us. And finally, to complete your visit, each mountain in Croatia offers a small stamp so you can mark your mountaineering logbook – or in my case, my sketchbook. Better than an “I climbed Mt Učka” tee-shirt!

Next up, we’ll be heading south around the coast for some ancient Histrian history – and some great wine!