Wooden boats are an important part of Dalmatian history, a crucial item for generations of people as a way to put food on the table, and for transport. After all, there would be no islanders if there were no boats. The current exhibition in the Vrboska Fishermen’s Museum provides a fascinating glimpse into a time when boats were designed and made-to-order by master craftsmen in one of the many shipbuilding yards up and down the coast. 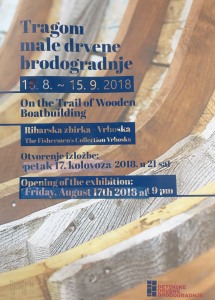 On the Trail of Wooden Boatbuilding 17th August – 15th September 2018

We love to see the traditional wooden boats lined up on the waterfront in Vrboska, they have so much character! The standard small boat of choice is a gajeta, which comes in different variations to suit local conditions and use. Around 5-8m long, it’s often fitted with a latin sail, has an open deck, and can carry 2-4 people. Its big brother the leut is 7-10m long, is much more massive and has a covered deck. On the smaller side is the pasara, or the kaić, which has more of a straight cut-off stern. 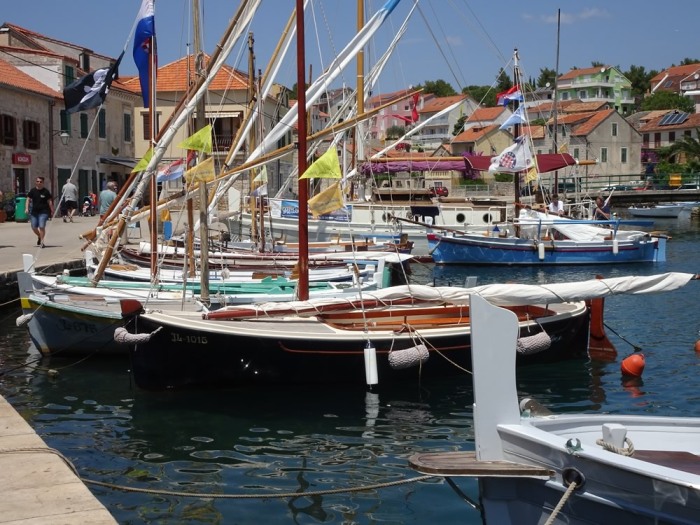 The exhibition discusses how to design and build a wooden boat, first constructing a model, or half-model to verify the feasibility of the design. Once you get on to the full-size construction, everything must be done in a particular order so the frame won’t move during the process. It’s quite a complex version of a 3D puzzle, and there are formulae to determine the optimum length for each piece.

Half model of a kaić

Each of the woods used have different characteristics, such as soft/hard, easily splintered or not, strength, torsion, and how well it works in and out of water. Tradition says that wood for boatbuilding should be cut during the inactive period of the tree, defined as ever here by church celebrations, in this case between Assumption and the Nativity of Mary (15 Aug – 8 Sept). Alternatively in January, the coldest time of year. So on a quick survey around the boat we have elm (sections, deck planking), oak (all important structural elements), silver fir (masts, moulding), scots pine (deck floorboards, masts, planking), almond (oar grips), beech (oars, rudder axle), mulberry (transoms, rudders, rails) and holm oak (keels, posts, tillers, cleats).

The slipway of the old Vrboska shipyard can still be seen across the water, although these days it’s not in good condition and only used for repairs and a communal drydock facility. Go back a century though, and it would have been a very different picture. Boats of all sizes in progress! 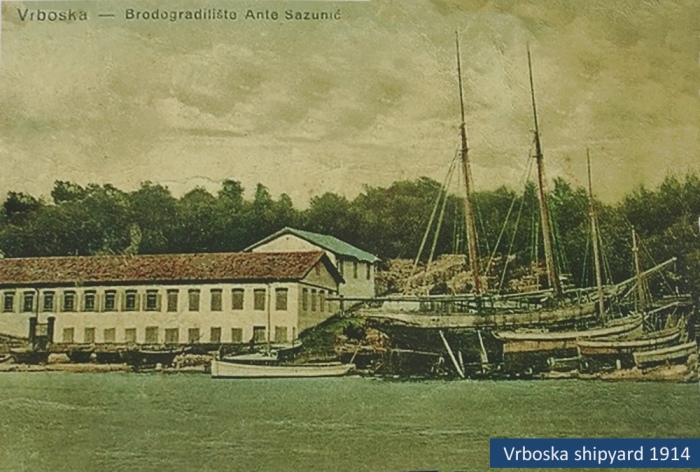 At least some of the lovely old wooden boats can still be seen sailing up and down the coast, though not quite in the same numbers. This view of Split in the early 1900s is not so different from now, although these days they’re more likely to be carrying tourists than other forms of cargo! 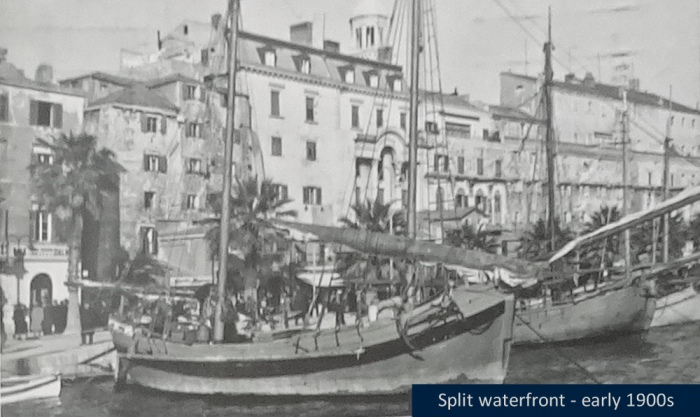 The exhibition is on until 15th September – go take a look!