The town of Ston, and its partner Mali Ston lie at the base of the Pelješac peninsula. This place is famous for its salt, an extremely valuable commodity in past times, and the lagoon with its salt ponds was vigorously defended by Dubrovnik, who owned the local salt trade. To keep it safe from predatory pirates, this tiny town has defenses that put you mind of the Great Wall of China. Two rows of walls and towers snake up the hillside, protecting Ston from behind, while a massive fortress blocks any attacks from the sea. These defenses are what defines Ston in the minds of many tourists today. There’s even an annual Ston marathon which takes place on the walls!

And the third thing that Ston is famous for? That would be oysters. The peaceful gulf between Pelješac and the mainland is a perfect environment for oyster farming, and this is where we find Mali Ston, i.e. “Little Ston“, dominated by the fortress marking the eastern extent of Ston’s defenses. And it’s there on the waterfront that the annual Oyster Festival is celebrated in March, on the feast day of St Joseph. 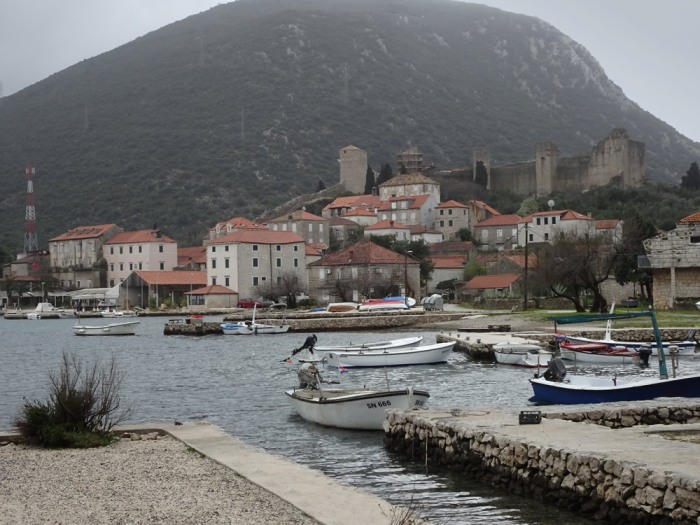 From Hvar, it’s an easy drive (with a short ferry hop) along the island and down the coast to Mali Ston. The weather was not at all promising for the weekend, and in fact thunderstorms were forecast for 11am Saturday, which was of course, exactly when the festival was due to open. The facebook page for the festival showed them erecting a tent two days before. Hmmm. This could get wet!

In the event, the worst of the weather was foggy rain on Hvar – both leaving and coming home. For the rest of the trip down the coast, it was grey and overcast, but the threatened storms never materialised. We arrived in Mali Ston just before lunch, and took a little walk to get acquainted. The hotel Ostrea is right on the waterfront, with gorgeous views over the harbour and lagoon. On the opposite shore is the mainland. Of course, the views really came to life on the day we left, which was in beautiful sunshine! 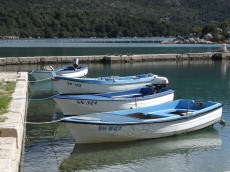 Blue boats in the sun 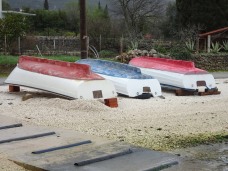 Tower marks the end of the city walls

Art through a window

Harbour in the sun

Lunch was at the Kapetanova Kuća restaurant next door to our hotel. It’s owned and run by the same family, and the food is excellent, obviously specialising in seafood. Great winelist, including Miloš and Matuška by the glass. At a table by the window, we lingered over our lunch, watching as more people arrived and preparations began for tomorrow’s festival.

In the afternoon we walked into Ston, finding that at 3pm we were too late to tour the walls. There’s a nice path alongside the road, and it’s not far. Ston itself is a lovely little town, set out in a grid pattern. The fortress is clearly by the same builders as Dubrovnik’s city walls, and they meant business! The walls above the town are impressively high, intended to keep out anyone attacking from the peninsula, that would be the uphill side. 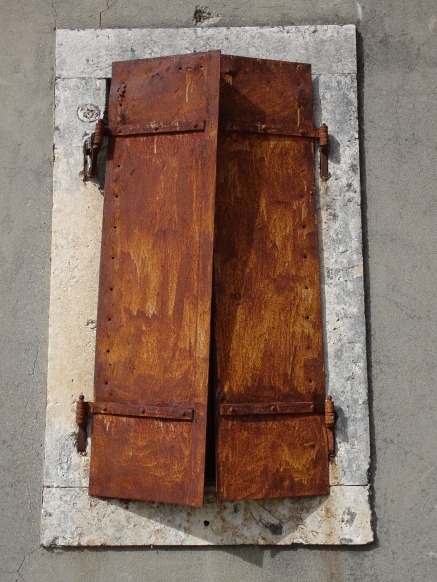 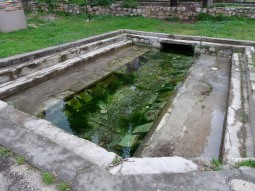 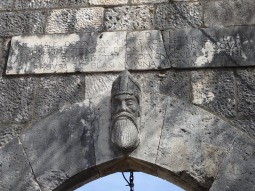 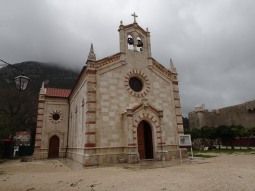 Ston fortress from the sea

Ston fortress from the town

Bishop in the wall

At the Salt Museum on the lagoon, a video played, showing the history of the area, and how the salt is collected still in the traditional way. Obviously in March there’s nothing doing outside. A party of Vietnamese tourists shared the video room with us, comparing the salt production here with operations back home. Much laughter as the girls declare the Ston men in the video to be much sexier! Sorry, no pictures of them! 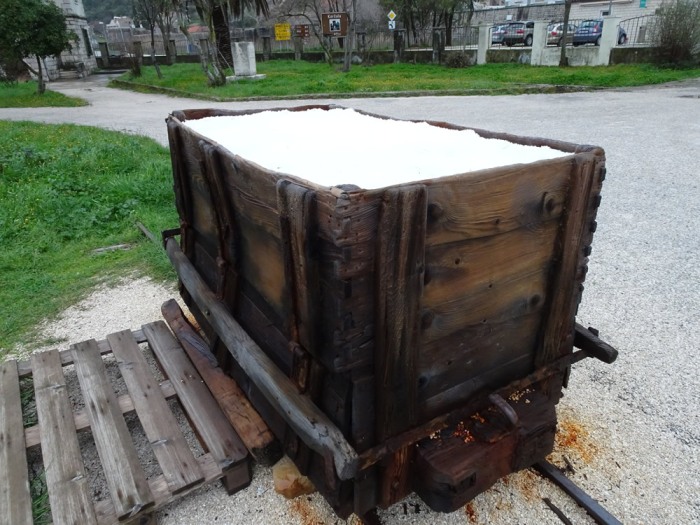 Dinner was at Bota Šare Oyster & Sushi Bar, the second of Mali Ston’s three restaurants. This is a relative of the one in Split, where we had our first taste of Dalmatian sushi! It being a tad chilly on the terrace, we went inside, which is significantly larger than it appears from the outside! Converted from an old salt warehouse with a high vaulted roof, there are a couple of wooden balconies overlooking the main dining floor. It was packed that evening with a convention of Croatian neurosurgeons, apparently an annual outing for them. A trio of musicians was in full swing, and the atmosphere was friendly! From the front of the balcony, we had a great view of it all.

Saturday was the day of the festival, and activity started around 6am to manoeuvre the rafts into place along the waterfront, basically doubling the area.Sacks of oysters were being delivered by van and by boat, and the riva was a hive of activity. Until things were ready, we set off to explore the walls, which were open for free that day! These are seriously impressive walls, with a fair drop on both sides. One side had a handrail, the other a low wall. And of course, the wall leads off steeply uphill. I made it to the second tower and enjoyed the spectacular views before wimping out and heading down into town again. I cannot imagine running a marathon on that wall! 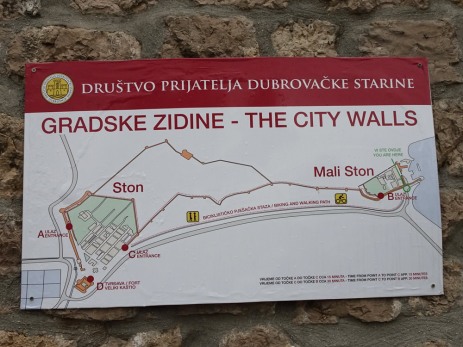 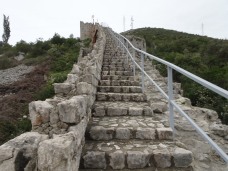 Meanwhile, the festival was ramping up. The covered market area and tent held a stage, a long line of wine-tasting tables and a pastry/dessert section. The oysters for the most part were available on the boats or the front of the covered market. Pay 30 kuna for a commemorative tasting glass, and you’re off! I have to admit at this point that I don’t really like oysters. However, this was a great party, with not just the musicians and folklore troupe on stage, but a couple of other wandering minstrels circulating informally round the tables. The young lads with the hats were really good – sort of folk music with a jazzy twist! And the impromptu klapa singing was lovely, and I thought preferable to the probably more famous official act on the stage.

Flat boats along the shore

And how are you enjoying the festival? 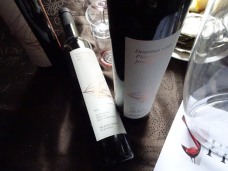 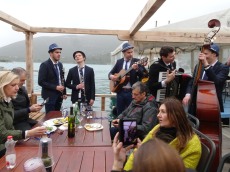 This being Pelješac, the local wines were excellent. There were a couple of sparkling wines, whites (Pošip and Malvazija), and some rosé, but mostly reds, specifically Plavac Mali. That is, after all, what Pelješac is best known for. My favourite wine of the weekend was the Matuška Postup, with their Dingač a close second. Oh, and there were a couple of really nice dessert wines, which is what I understand I must call prošek these days.

On Sunday morning the sun shone and we saw a different side of Mali Ston, all bright and sparkly. Looking gorgeous, actually! Our plan for the day was to visit Miloš winery at Ponikve. Views of the vineyards on the way up were absolutely spectacular!  Here’s just a taster of the scenery, and I’ll cover the wine-tasting in a separate blog. 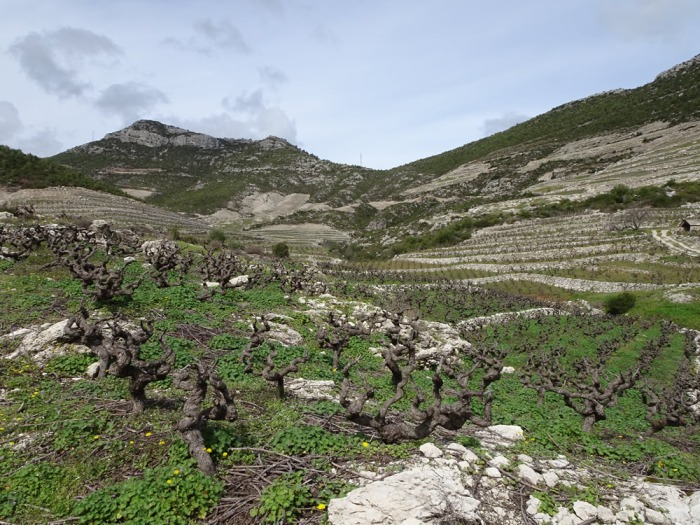 Lunch back on the Ston lagoon at Konoba Mandrač. It’s well hidden away over a causeway to a tiny fishing port. Their fresh seafood was simply prepared and tasted wonderful! This was clearly a popular place with the locals for Sunday lunch. Himself declared the oysters here to be the best! 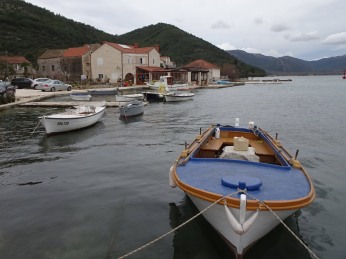 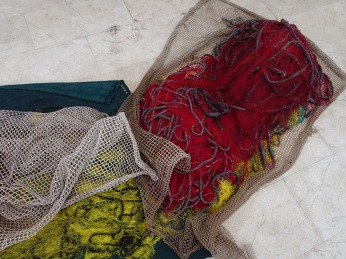 What a great weekend! This was a fun event, very well-organized and had a nice, local feel to it. It appeared that many people came up from the Dubrovnik area just for the day, as I’m not sure there are that many rooms and/or apartments to be had in Mali Ston!

2 thoughts on “A weekend in Ston for the Oyster Festival”