Split’s Croatian National Theatre (HNK) has a full winter program of drama, opera and ballet, including the Nutcracker, although it took me a minute or two to recognise that under the name of “Orašar” in the schedule! Advance publicity and booking is curiously restricted to just one month ahead, making forward planning slightly tricky for islanders like ourselves. It’s not just booking theatre tickets, but also arranging overnight accomodation.  In summer we have a late night ferry option to get home after an evening out in Split, but not in winter!

We set out for our evening’s entertainment on the 11:30am ferry from Stari Grad. In a surprising turn, the ferry at the dock was MT Zadar, as it seems Tin Ujević is off for his (or is a boat always her?) annual maintenance. More usually on the run across to Italy, Zadar appeared absolutely enormous to us, and I got rather  lost on an exploratory stroll around the decks. Perhaps some signs on the doors would help, guys? Being bigger, Zadar was also faster than Tin, taking just an hour and a half to make the crossing. Well, most of it. Sadly that extra half hour evaporated as we powered down for entry to port, and jeez, that must be the slowest door-lowering mechanism on the seven seas?

In a cold and windy Split, we headed for our hotel. The Villa Split Heritage Hotel is right on the corner of the Pjaca, at Zadarska. It’s a beautifully renovated stone building, perfectly peaceful despite its central location. And an easy walk to the theatre, with dinner on the way at the charming, and rather quirky Corto Maltese.

The Split theatre is a fine building, opening its doors originally in 1893 and restored several times since, most notably in the 1970s following a devastating fire in the auditorium. It’s a very distinctive yellow and white confection, in contrast to the stone walls of the medieval old town, or the more modern square blocks nearby. The Christmas tree out front is decorated with a Split waterfront scene. Magical!

Inside, the auditorium is quite compact, with three rows of boxes above the stalls, and topped by a tier of lights and seats up in the gods. The decor is true to the late 19th century original in cream and gold, with lots of red velvet. Being more used to tiers than rows of boxes, I have to say the seating arrangement must have given a somewhat limited view of the stage for those on the rear chairs. In front, we were just fine! But really, I think the point of boxes is to see your friends, and be seen in your finery! 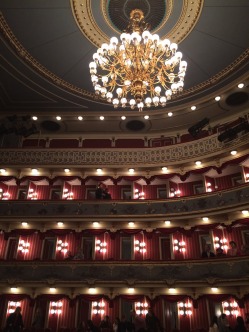 Boxes on the other side 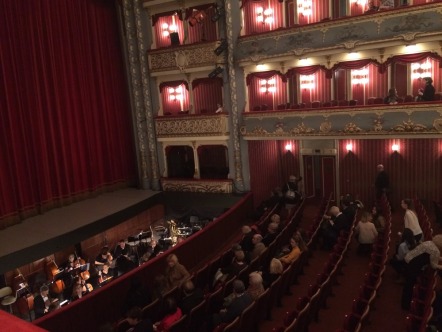 The opera (strictly, operetta) was “Mala Floramye” (Little Floramia),  by Croatian composer Ivo Tijardović. The plot is along the lines of (1) boy and girl fall in love, (2) war intervenes and life gets complicated, (3) they find each other again and get married. The scene is set in Split before & after the First World War, with the middle act in the south of France. Having said that, lovers Mirko and Floramye are not really the main point here, it’s all woven together by the comic characters surrounding them, in particular Mr Bepo who is the real star. There are in-jokes about life in Split, apparently still as sharp today as when they first appeared in 1926! Unfortunately those jokes largely passed me by, foreign as I am, but the visual comedy was so much fun and I did recognise some of the songs! Excellent performance all round!

All in all, a thoroughly enjoyable night out! And, if you add up the cost of the ferry tickets, theatre seats and overnight accomodation, it was still a bargain compared to opera tickets in many other places! Plus, we got to visit the DIY stores in Solina, and I ended up on the return ferry carrying a tin of paint. Result!

Thanks to HNK for the better photos of the theatre, the posters and the opera itself.