Vrboska was founded by fishermen, and the current residents take great pride in their heritage. Along the waterfront you will find a good proportion of shapely wooden boats in amongst the more modern fibre-glass ones. The local latin sail club (Udruga Lantina) is a bunch of enthusiasts who love to sail the traditional working boats in the old way. I always enjoy the sight of their beautifully turned-out craft, lined up along Vrboska’s riva. 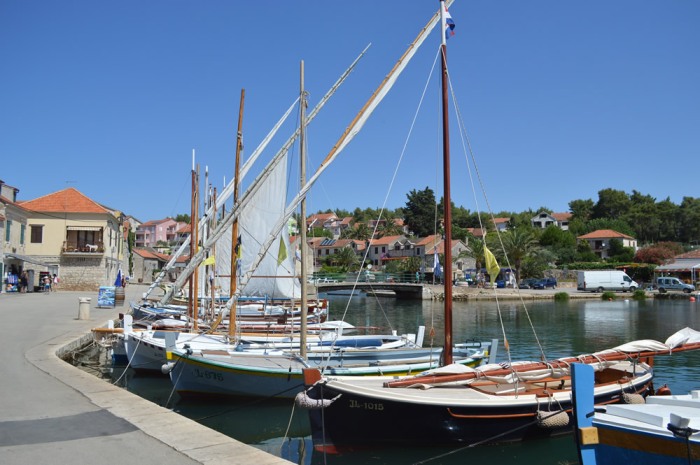 On St Peter’s Day (29th June), the Lantina boys had a full day of activities planned as, they said, Peter was a fisherman too! The forecast for the day was not brilliant, though they had hopes it would settle by the afternoon’s regatta. Turning up to watch the preparations, we were honoured to be invited along for the sailing later. I should note here that we are not sailors, and can’t correctly name parts of a boat in English, let alone Croatian or local Forski!

To start the festivities, a service was held at the chapel of Sv Petar, a tiny 14th century building that marks the historic boundary between Vrboska and Jelsa. There’s space for 12 to sit inside Sv Petar, but many more stood outside.The little park is carefully tended by volunteers, and makes a shady haven for the local folks.

The plan to sail the boats along to the church to be blessed did not quite work out, between the strong winds and the unexpected presence of a rather large boat at the dock there. Instead, the priest walked along to the boats, which were duly blessed.

There followed a short lull, in which the boats were prepared. Sails arrived, attached to long wooden beams, which were then mounted onto masts. Each boat was different, some because they had a different purpose, others simply a local variation depending on where they were built.

Murter boats are the strongest, apparently, as they were built to transport farming equipment and animals around an unpromising agricultural terrain. There’s a famous boat-building factory there we want to visit! The Murter Latin Sail club is the largest in Croatia, followed by…yes, our own Vrboska club! Each year, at the end of September, a large Latin Sail event is held on Murter, that must be a fine sight! 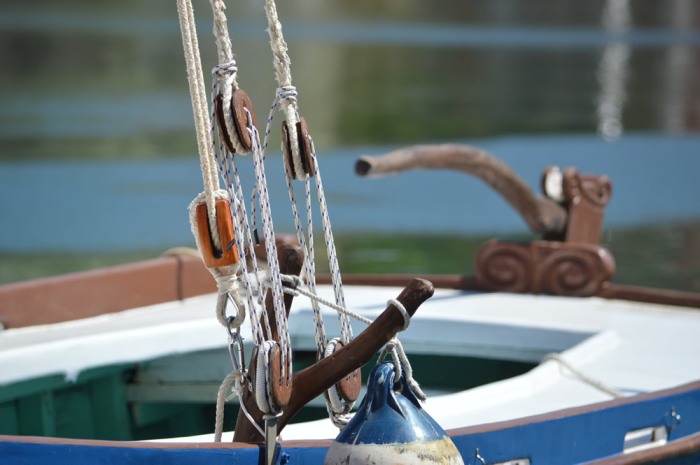 As we wait for the regatta to set off, I settle down to sketch the line of boats, always a great way to see details. One had a rounded backend (stern?), while the next was more pointed and another was quite square. We learned that the wider bodies were more for transport, while narrower, sleeker bodies were built for speed. All fascinating and beautifully cared for.

My sketch of the boats

Finally, there was a move to get aboard. We were sailing with Jure on the Veli Gira, which is rather larger than most there and, somewhat unusually, has a cabin. Plenty space for guests, which was good for us! The boat is 62 years old, in beautiful condition, and used to be called Morski Konjić (Seahorse), when Jure’s father sailed her. The new name, Veli Gira (Great Gira), reflects both the family nickname and a type of small fish.

It seems that all these boats have their own names, although not painted on the prow, which is where the registration number goes. Jelsa boats (including Vrboska) have JL, Stari Grad has SG, Hvar has HV, Murter has MU, etc. The names are more subtle, sometimes painted on the outside of the hull, sometimes inside. Each one is the pride and joy of their owner! Moli Gira means Little Gira, and is sailed by Jure’s father!

As we set out, some boats raise their sail immediately, and tack out of the harbour, I’m impressed, as it’s a fairly narrow inlet and the wind is coming at us almost directly from the way we’re headed.We can see how a classic latin sail is attached at an angle to the mast, and controlled by two lines. While this works well with the wind from one side able to fill the sail, the opposite tack leaves the sail against the mast. As demonstrated here by Mario and his doggie crew Kampi. 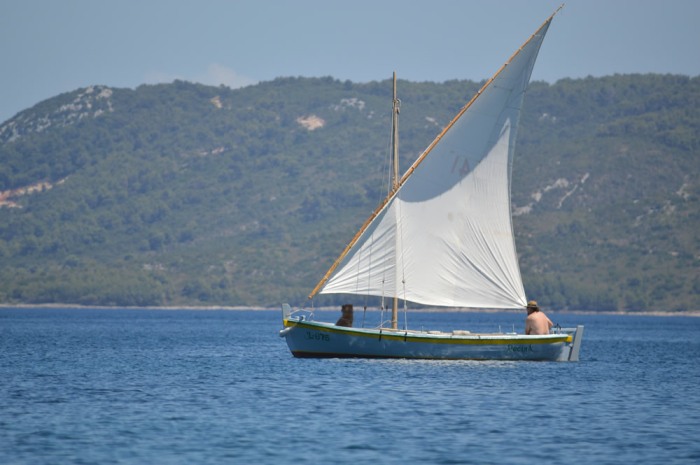 Sail against the mast

We all proceed sedately out towards the sea, some under power, others under sail. Our first marker is the big red buoy off the Senses Hotel.Our little convoy is creating interest on the decks of the more modern craft also making their way out of harbour. Catamarans seem awfully big when bearing down on you!

Pursued by a cat

The variations on the sails include those with a straight leading edge, as above, those with an extra spar attached, and those with an additional sail (jib?) up front, as seen on Marčellina in the photo below. Her day job is as a rather stylish taxi-boat service between Vrboska harbour, Senses resort and Zečevo island.

Starting at the red buoy off the Senses Resort, instructions were to round the bouy at the Hotel Fontina in Jelsa, then back to Senses resort. Simple! But first it appeared that we were to be boarded! Extra crew for the Veli Gira in the form of Tonko. 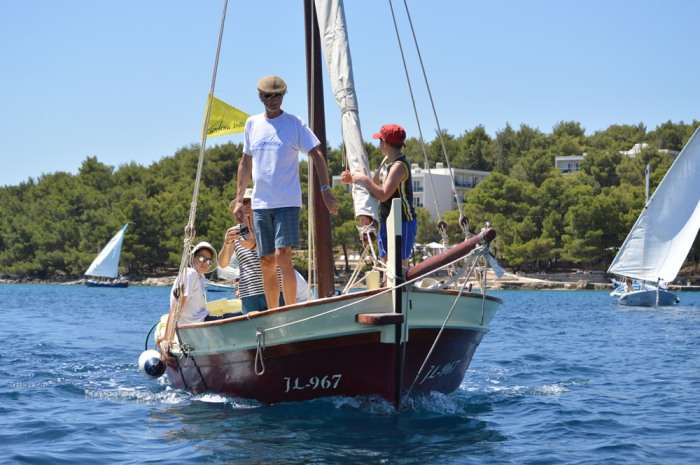 About to be boarded!

And finally, we can start. Being unfamiliar with sailing regattas, and the tactics required to get from one marker to another, we found it all a bit chaotic. Everyone seemed to be off in their own direction! Dave Barry’s sailing instructions come to mind: 1. Figure out where you want to go. 2. Do NOT aim the sailboat in that direction, instead aim the sailboat in some other direction! 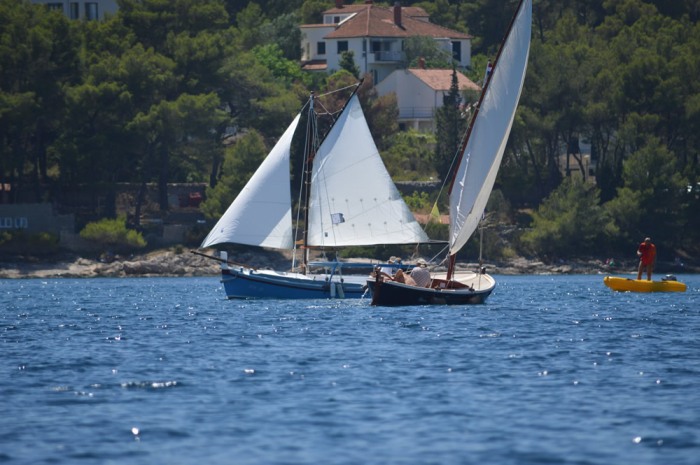 Variations in the sails – and a photographer!

It was an absolutely gorgeous afternoon out there in the bay, so peaceful, indeed just a bit too calm in places. We were doing really well on the way to the next buoy, but each time we came to the point at Jelsa, the sails flopped. And round we’d go again.

Seemingly we weren’t the only ones having difficulty, but Veli Gira is by far the largest and heaviest of the Vrboska fleet. I understand also that she has a slightly dirty bottom, which slows her down. There was some discussion also about the balancing of the beam carrying the sail, which could also be improved by shaving off some wood at one end. How to adjust the performance  of your latin sailboat!

And finally, we rounded that much sought-after buoy outside Jelsa, and headed back to Soline for the party. There we were joined by other friends and family members.We found ourselves sitting with a couple of Belgian enthusiasts, now pretty much locals, who told us how they had swapped their previous yachts as they really enjoyed sailing the latin-rig traditional boats. New boats in that style are still made, though the process does take some time. 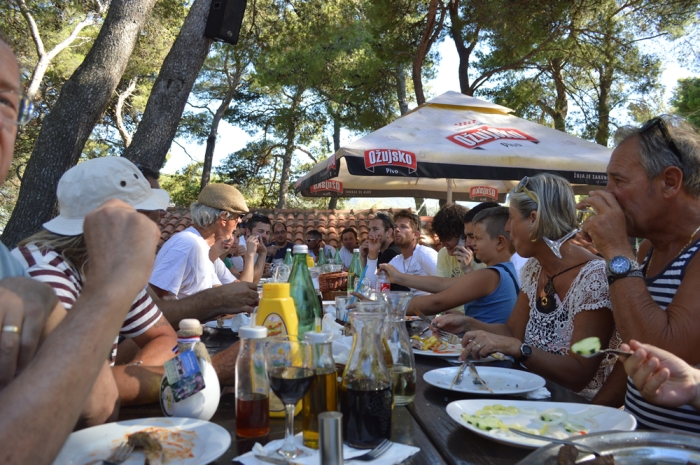 At the end of dinner, prizes were awarded for the first three boats back to Soline..I have no idea how they even found that buoy at Jelsa, let alone reached it so speedily! Kudos to them! 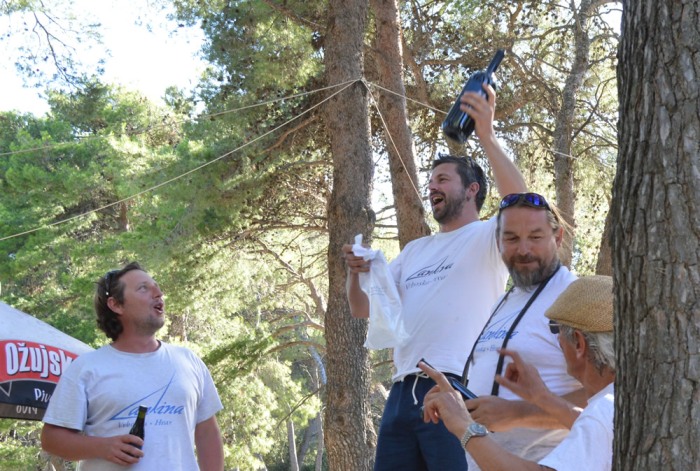 Meanwhile, the Lantina fleet was waiting at the dock at the Senses resort. By later in the afternoon, it was not so crowded with sunbathers.

We all took to the boats again, including many of those family members who had come for the dinner, especially some very happy kids. It was a merry little party that made its way back into Vrboska as the sun was setting. The water scoopers turn out to be pretty good weapons to catch the unwary in other boats. I had to take care to keep the camera out of range of flying water!

Water scooper as a weapon

We had a pretty view of Vrboska as we sailed (well, motored) back in. The sun was going down behind the houses, and the sea shimmered silver. 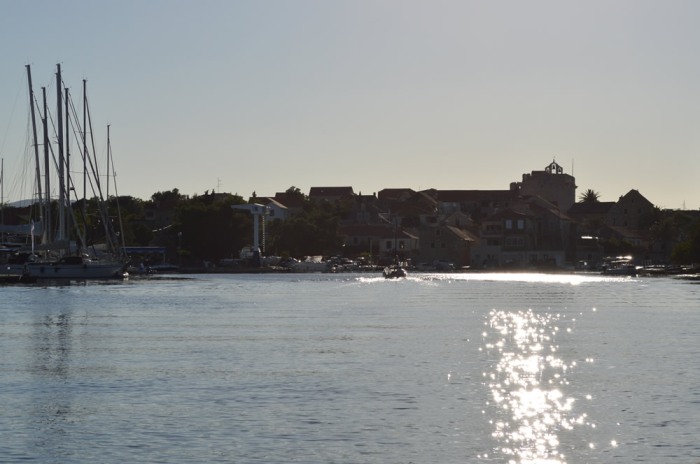 Heading back to Vrboska

It’s a time to tidy up the deck and make everything ship-shape. The sail is taken down and stored on the side, while ropes are neatly coiled.

And the day’s festivities weren’t yet over! In the evening there was the opening of an exhibition of model boats by Željko Luka Fredotović in the Fishermens’ Museum, a belote tournament, and a big party with food, wine and live music back at the park near Sv Petar, where the day began.

This is one of several special events organized by Udruga Lantina during the year, including teaching traditional sailing skills, and involving local kids. We had such a great day with the Lantina guys, many, many thanks to them for inviting us along, especially Mario, Jure and Tonko. The latin sail boats are definitely the way to go. I feel a shopping trip to Murter coming on! 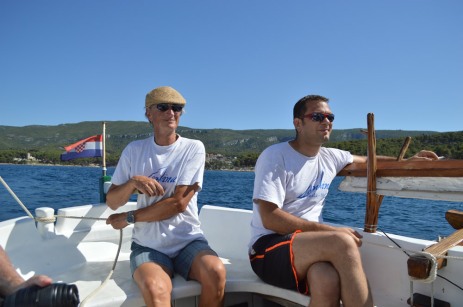 Our crew Tonko and Jure 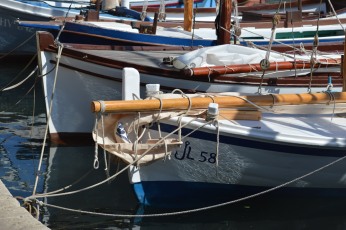