After watching the nest remotely for a few days, I was thrilled to catch sight of a chick take flight from the nest and land on the nearby light. That was Saturday 23 June, at 8:26am. The new fledgling was fed by a parent there, looked around for a while and returned to the nest, where it landed on top of its siblings! Yay! A successful first flight!! 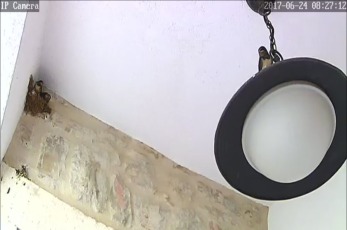 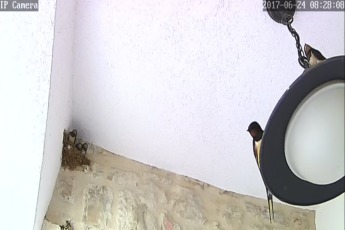 Chick and parent on the light

If I hadn’t seen it happen on the nestcam, we would not have known. For the rest of the day (a roasting 34 degrees C) all four chicks were piled on the nest as usual. And then this morning, this.

An empty nest. Arghhhh! Did we completely miss the rest of the babies taking flight? Where’d they go? But I can still hear them and there seem to be rather a lot of swallows flying around in our courtyard. Ah, there they are!

Fledglings on the light

Our porch light is a handy platform! From there, they ventured out to practise their flying again. From time to time they land on the wire, where I managed to catch a quick family portrait with one parent and 4 chicks.They are clearly smaller, and have not yet grown their long V-tails.

Here’s a better close-up of three of the youngsters, looking like real swallows now. They were watching their sibling practise his aerial skills. 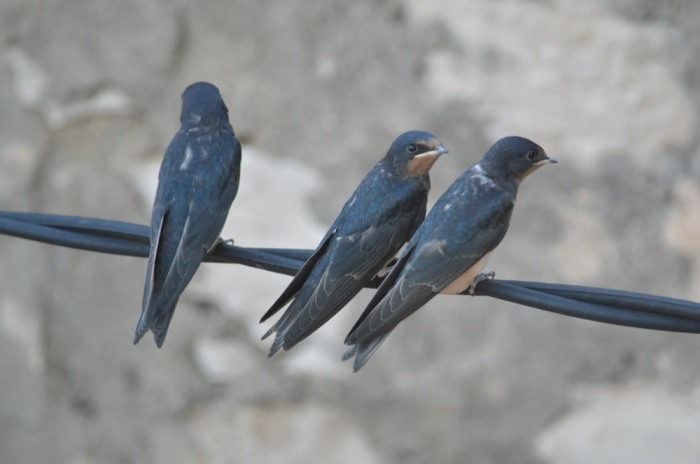 He can fly pretty well already, but the landings definitely need work. Always the hardest part of learning to fly, I guess! Here he’s managed to park himself on the neighbour’s roof.

Now that’s better! A nice clean landing perched back on the wire. That seems to be the new feeding station, and the parents will still feed them for some days to come. And very soon they’ll be catching their own insects.

I wonder when the parents will start another round? Please let me get my porch clean again first!