Taking the D1 backroad from Zagreb to Split, we stopped off for lunch at a small town that I’ve badly wanted to visit ever since I first saw photos of its antique wooden houses with waterfalls tumbling between them. Slunj is a very picturesque place in the mountains where the River Slunčica meets the Korana, and Rastoke is its historic core. It’s a bit off the beaten track for us, as we usually take the faster motorway – however, this September we had time to take the scenic route instead!

Rastoke overlook from the main road

This used to be the main road south to Split and Dubrovnik in the days before the new autoput was built. Nowadays it’s still a popular access route for tourists getting to Plitvice Lakes National Park. Just 33 km north of Plitvice, the road takes a big bend to itself, and crosses a bridge high over the canyon of the river Korana. Below the road is the green meadow where the Slunčica meanders, branching into smaller streams before each one tips over the edge into the Korana. 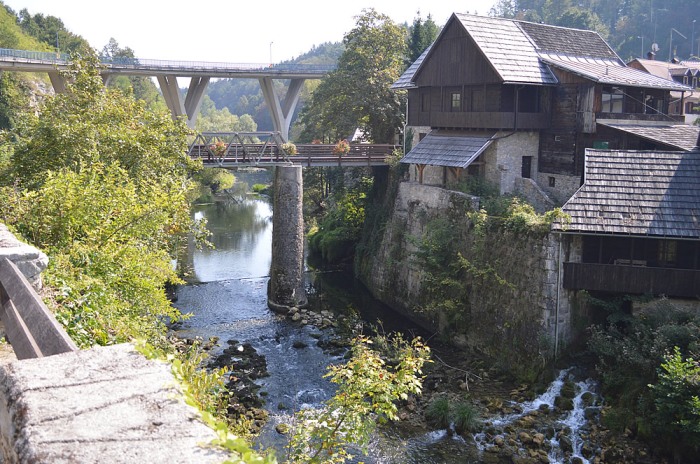 The main road bridge and the smaller, more floral, access bridge to Rastoke

The waterfalls here have been formed in exactly the same way as at nearby Plitvice Lakes, with deposits of  carbonate minerals in the water building up layers of travertine. The Slunjčica river actually begins life in the Mala Kapela range as the Jesenica, which then quickly disappears underground after only about 6 km, resurfacing again 20 km away just to the south of Slunj and now known as the Slunjčica. That’s actually quite common behaviour for rivers in this karst landscape. While underground, the flowing water dissolves high concentrations of calcium carbonate from the limestone. Back on the surface, this interacts with plant life such as moss, algae and bacteria, and sediment gradually accumulates as travertine barriers at the rate of about 1cm a year. This process creates the new rock down which the river cascades. At Rastoke, as the Slunjčica falls into the Korana, the travertine barrier is around 500 m wide by 200 m long, creating 23 waterfalls which drop about 10-20 metres into the Korana. 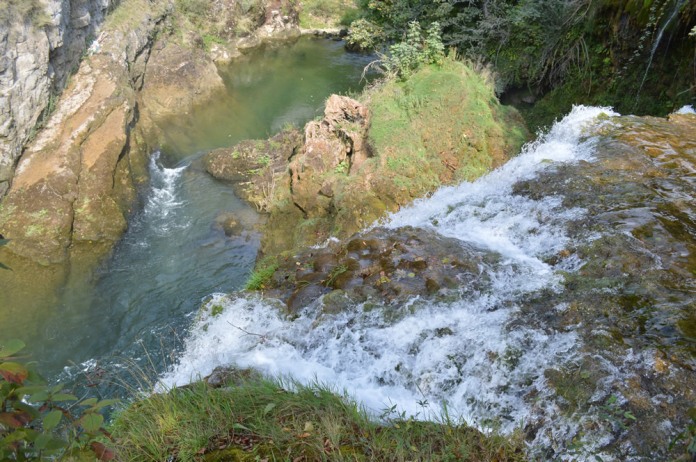 Top of the falls

Since the 17th century, Rastoke has been known for its gristmills, up to 22 of them at its peak. Most of the dwelling houses are from the late 19th to early 20th century, and some are still in use today. The ground floor of the houses are made from travertine, while the upper floors are wooden, constructed in such a way as to be easily moved and rebuilt if necessary. The mills were driven by carved wooden scoops on the waterwheels. Inside the mills, two or three large millstones produced flour from the various grains. In the so-called “black” mills, that would be barley, maize, millet, oat and rye. The “white” mills were reserved for wheat. In the restaurant Pod Rastočkim Krovom (Under Rastoke Roofs), you can get 5-grain bread, still made from locally milled flour – very tasty it is too!

At the centre of Rastoke is a thoughtfully-designed visitor centre, based on four small islands connected by wooden bridges. The Pod Rastočkim Krovom acts as entry, and the owners also have rooms for rent in a couple of the old houses next to the mill. There are displays of the workings inside and outside the mills, a museum of life here in times gone by,  a very ethnic washing machine, trout ponds and a beautiful grassy meadow where you can sit and enjoy the views of the falls. A cave is down a steep set of steps in the canyon wall. Not much of a cave to be honest, but interesting to see the travertine being formed, just like stalactites. And the view from down on the canyon floor is impressive.

Table with a view 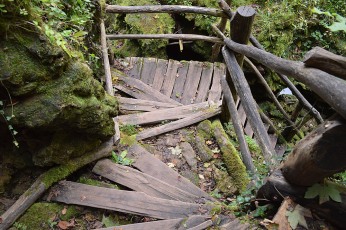 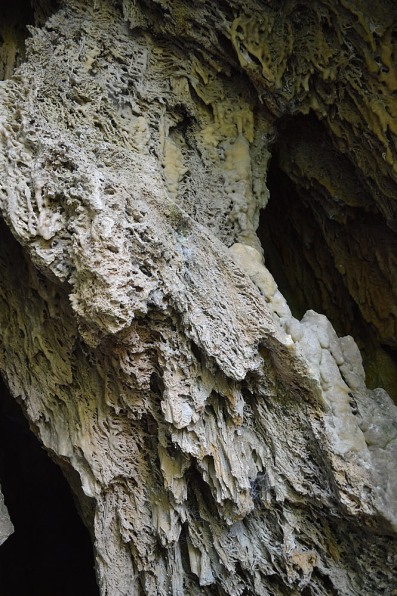 Travertine inside the cave

Entrance to the cave

Slunj, or Slovin as it was originally known, was an old fortification on the border with the Turkish Empire, first mentioned in the 12th century. The town was pretty well destroyed during the wars of the 16th century, but was rebuilt towards the end of the 17th century after the Treaty of Sistova when people once again repopulated the area. Slunj was mentioned by the chronicler Johan Weikhard von Valvasor in 1689 as a fortified town with a bridge and a mill. The first illustration of the mills of Rastoke is a copper engraving from 1789, showing that there used to be lots of them back then. Slunj became fairly prosperous in the early 1800s, as more mills were built, and vineyards and mulberry trees planted.

18th century etching of the mills is impressive!

At the end of the 19th century, Stepan Širola wrote in his travel journal: “The surroundings of Slunj are downright romantic […]. They are crowned by the magnificent waterfalls of the Slunjčica river by which even not outspoken nature lovers will be captivated. Indeed, Slunj with its romantic surroundings and the silver waterfalls of the Slunjčica represent a true nature gem astonishing even to foreigners.”

My own sketch of the waterfalls from the meadow

Even up to the 1990s, Rastoke was still covered in old wooden structures. Sadly, this area was once again in the wars when the retreating Yugoslav army attempted to destroy the bridge, managing instead to blow up many of the houses below, and cause serious damage in Slunj. Much of what we see now has been reconstructed since. With the change in main route south, Rastoke doesn’t see as much traffic as it used to, but this beautiful  little place is well worth a special visit, and we’d love to stay here sometime, and waken up amongst the waterfalls. Its peace and tranquility (and lack of large tour buses) is part of its charm.

2 thoughts on “Inland Croatia: the Waterfalls and Mills of Rastoke in Slunj”