Zadar is one of the few places on this trip that we’ve visited before, but that was only as a quick detour and we hadn’t actually stayed overnight. The old city is a lovely place to stay, as you can forget about driving, and simply walk around. And after dark it gets particularly magical! Anyway, let’s start with Zadar’s best-known tourist attraction – the venerable old church of Sv Donat (St Donatus)  in what was once the Roman Forum. Sv Donat is an architectural marvel, built in the 8th/9th century, using some of the blocks handily left lying around from previous buildings – mostly Roman temples by the looks of it!

It’s amazing that such a tall building still stands after all this time – constructed as it was with no underground foundation, and on top of such a muddle of old fluted pillars and assorted Roman-inscribed blocks. Some of the pillars aren’t even upright, they’ve just been left lying on their sides with gaps between, perhaps as a mark of deliberate disrespect for their previous use in  pagan temples. 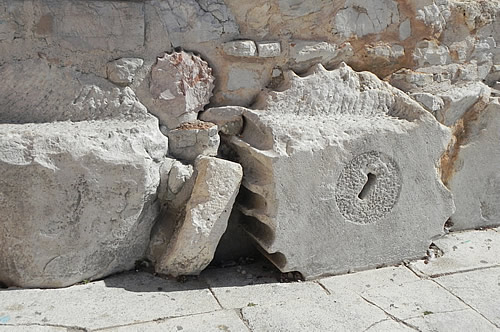 Repurposed pillars along the base of Sv Donat!

Originally known as Sv Trojstvo (Church of the Holy Trinity), the church was renamed St Donatus in the 15th century after  the bishop of Zadar who oversaw its construction. This is a fine example of a pre-romanesque church, built with the circular footprint that was typical during the time of the Byzantines here in Dalmatia.

The floor space is quite compact, with three apses radiating out from the centre, on one of which is a stage. The building has had various uses, and was even a warehouse for a while under the Venetians and the Turks, and later did duty as Zadar’s  archeological museum. These days it’s a concert venue for the annual International Festival of Medieval Renaissance Music. Apparently it has excellent accoustics!

Looking up – inside the dome

You can also climb up to the upper gallery for a look out at the Roman Forum. The ancient buildings are marked out on the ground, to give you some idea of what it would have been like. The view from above is helpful!

Zadar’s Forum is a lovely outside space, rather different from the piazzas in other cities, and a good blend of ancient and contemporary structures, such as this elegant fountain. 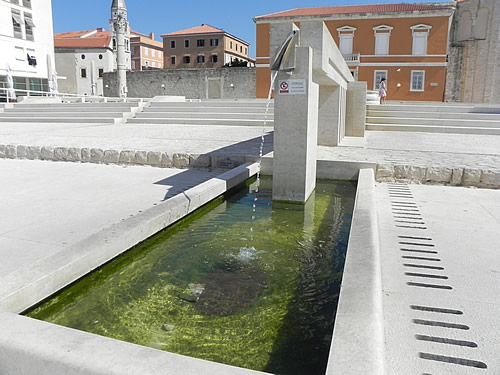 For this trip, we stayed in the Hotel Bastion, which incorporates the remnants of an old Venetian fortification dating back to 1289. It’s right in the heart of the old city, perfect for walking everywhere and we could actually (gasp) park directly outside the door! What bliss – that almost never happens in a medieval city!  When we arrived in the late afternoon, sagging slightly after a hot day’s exploration of Lake Vrana, the terrace bar was a wonderful place to revive with a glass of wine and a view over the bustling harbour. Kudos to that waiter who patiently brought us a selection of local wines to taste before making our choices of what to eat and drink.

The next morning, we popped into the old Arsenal building next to our hotel. The sign had mentioned an art exhibition, but it seems we just missed it – shame! An arsenal in medieval times was a covered dock where ships were built and repaired. This is a rather larger Arsenal than Hvar’s but much the same shape, and now run as an events space for exhibitions, conferences, weddings, etc. 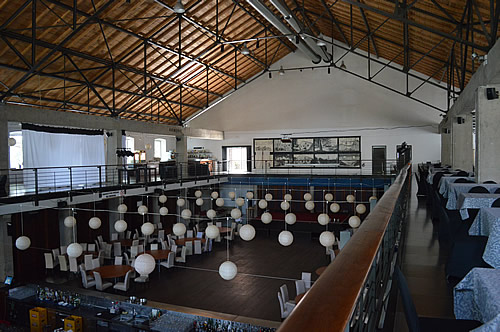 From the Arsenal, we walked along the road on top of the city wall with views of the more modern part of Zadar, with a footbridge crossing the busy harbour. Ferries come and go, and along with the posh yachts I’m glad to see there’s still a local fishing fleet.

Fishing fleet in the harbour

This upper-level street gives us good views down into the old city as well – here’s the street market and some of the apartment blocks. This is a live, bustling city, and people still live in the old town.

We’re making for the Museum of Ancient Glass, which is housed in the very elegant 19th century Cosmacendi Palace. This award-winning museum has a fascinating series of displays on how and when glass was first made, what it was used for and how it developed over the years. Great stuff! 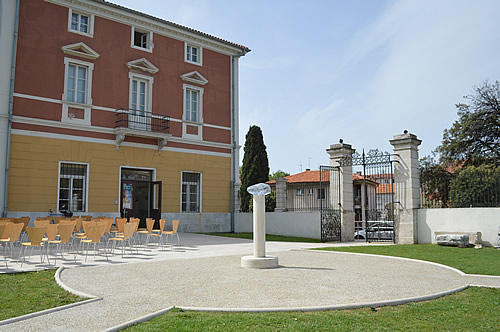 I really enjoy museums that are creative in communicating their excitement about the subject. This place has a wealth of examples of the different styles and types of glass objects – vials, bowls, bottles, and funerary pots- dating back to pre-Roman times. I really had no idea of glass being in use so early, and for such a range of purposes. A Roman dinner service with table settings in glass – really? And I was particularly moved by the display of glassware from a grave – what would have been one individual’s personal collection from one glass-maker or one cosmetic/medicine producer. The large jar, of course, is the funerary urn.

The museum holds demonstrations of glass-working, here with coloured glass rods to make jewellery and beads. That wasn’t going the day we visited, but there were examples in the visitor shop that I would guess are made here. Wouldn’t this be a great school outing!

On the upper floor is a complete glass-blowing workshop, where a modern-day craftsman was demonstrating how to make a  Roman-style bottle with a fancy handle. He was commenting on the technical issues of each part of the process, such as to how critical it was to get the right temperature in the furnace, and how much time you have before it cools, etc. Really interesting!

This was a great demo of how to make one of the ancient glass bottles, however… I was a bit disappointed how the appropriate costume for glass-blowers seems to have changed over the years. I was expecting something entirely different based on the mural on the way up the stairs! 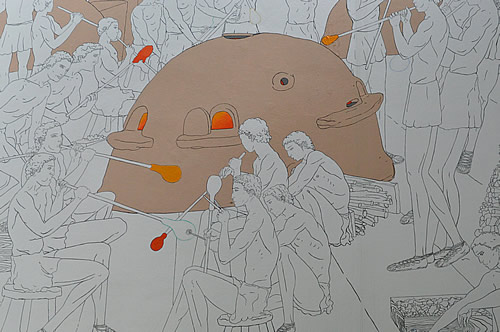 After a quick break for lunch, we headed to Zadar’s Archaeological Museum near the Forum. It has 3 floors of displays covering local paleolithic to medieval finds. There’s an impressive amount of Roman carvings, coins, beads and other artifacts, just as you’d expect, given Zadar’s long history. But two museums in one day was a bit ambitious, and absorbing all that information was getting harder. We were really a little museumed-out by the time we emerged back into the forum!

Bull’s head in the museum

In the evening, we walked along the waterfont to Foša, listening to the sea organ. This is a series of underground pipes that vibrate with the waves, creating a low thrumming sound. It encourages people to sit by the sea and just listen to the relaxing sounds. What a great idea! 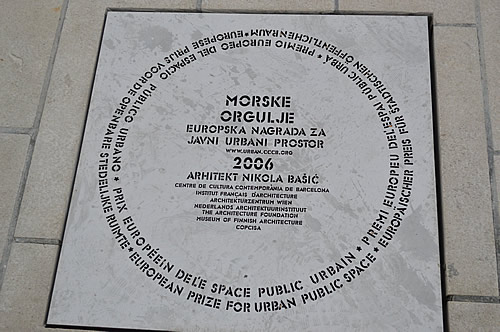 Next to the sea organ is the Greeting to the Sun. We spent some time trying to decipher it, but really there’s nothing much to see before sunset. A little further along is the Women’s Lyceum building – Zadar had a very enlightened attitude to further education for women. This building is from 1901, well before many other places/countries provided the same opportunities.

Our dinner was at Restaurant Foša, sitting outside on the terrace. It’s a beautiful location, watching the boats go in and out of the harbour. This inlet used to be a canal right the way through, leaving old town Zadar on an island. From this side of Foša, we’re amongst the outer fortifications and there’s an impressive Venetian gateway leading into town from here. Separate blog coming on dining at Foša – Zadar’s finest restaurant!

The main street from the Venetian gate is the Kale Larga, full of interesting little shops. I especially enjoyed the chocolate maker, Vitlov Čokolade, where you can try before you buy some extraordinarily good choccies. Also the fascinating designer jewellery shop, Zlatarna Celje, where my lovely birthday pressie came from!

At nighttime, the old city is really quite magical. The belltower for the nearby Sv. Stošije (St Anastasia) cathedral is beautifully lit. The top two floors of that 15th century belltower were only completed in 1892 by the British architect Sir Thomas Graham Jackson, who modelled it on the belltower on the island of Rab. Lots of people still out and about at this late hour. Just round the corner past the belltower is a wonderful ice cream shop – and it’s open late! 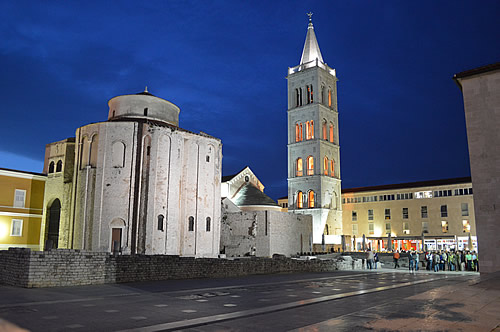 Nighttime in the Forum

We finished up our evening at the Greeting to the Sun light show, which was totally amazing after dark, to stand within the big circle and be surrounded by washes of colour and swirling patterns. All to the background of the nearby sea organ. Very cool!

Salute to the sun – light show

And here are a few sketches from today. Here’s one of the street market, as seen from our vantage point above: 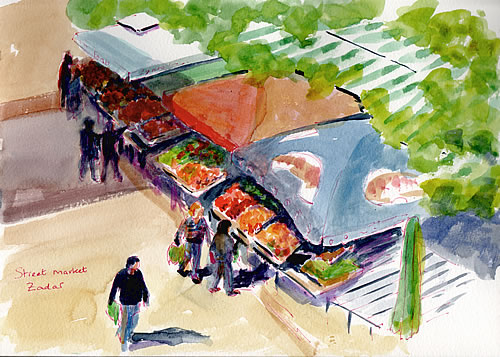 The very impressive Kopnena Vrata (Landward gate), brightly lit up at night, with its Venetian lion guarding the city: 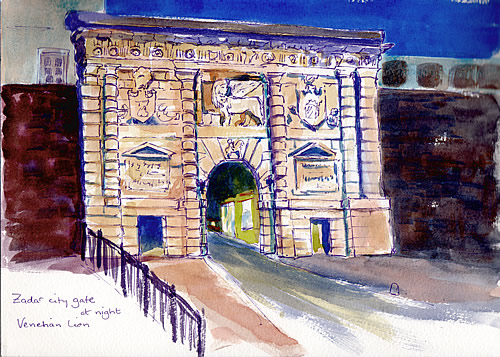 And my version of the late-night scene at the Forum, the image of Zadar that stays with me. 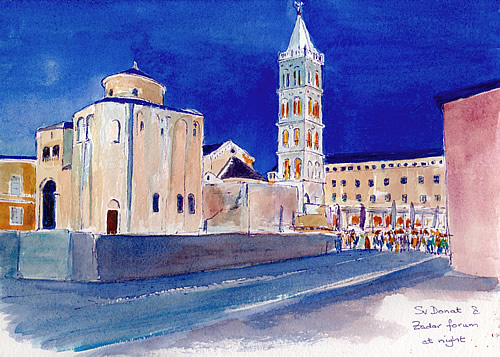 Sketch – night at the Forum