About a year ago, we visited the Plančić winery in Vrbanj, and were very excited to try their Darnekuša. It’s a very different kind of red from Hvar, unusual to find as a single varietal. This year we called ahead, and were privileged to have winemaker Antun Plančić himself, along with brother Mario to guide us through the tastings. Plančić uses only indigenous grape varieties from the island of Hvar, and his wines are interestingly different from the ubiquitous Chardonnays and Cabernet Sauvignons that we’re so used to elsewhere. Plančić is one of the two largest wine-producers on the island, along with the more famous Plenković. He’s been doing well recently, earning awards in London for his Pharos Grand Cru – which just happens to be one of our favourite wines, more of which later. They’ve been creating a large new vineyard with the help of some enormous earth-moving equipment, high above the sea in the mountains. The ground had been used as a vineyard in a previous century but had reverted into pine forest, but that had burned in a fire. And now it will be a vineyard again! 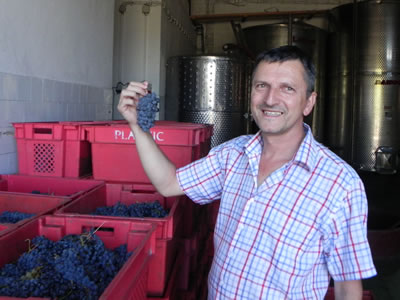 So what does Plančić have new for this year?

Starting on the whites, we compared the Bogdanuša and the Parč.  Bogdanuša is a lovely fresh, light, floral wine, perfect for quaffing on the terrace of a summer evening. It’s not a complex wine, unlike Parč, which is more intense, slightly aromatic, with a touch of oiliness. In blending the two varietals, Plančić has created Ager, a wine that offers the best features of both. They start by hand-selecting the best grapes from specific vineyards… including those from around Vrboska I was pleased to see! The wine is aged for at least 18 months before bottling. In addition, the Ager Reserva is partly aged in barriques – small oak barrels. Although not long bottled when we tasted it, the Ager Reserva was very promising with minerals and aromatic herbs in there somewhere!  We liked it a lot, and brought away a bottle each of the Ager and Ager Reserva, which we’re looking forward to trying with food!

And so we moved on to the reds, and the main feature… first up, their basic Plavac Mali, which is a good reliable standard – soft and well balanced. Then we stepped up to the Pharos range, for which the grapes are hand-selected from specific vineyards, and spend more time in barriques. The flavour gets smoother and at the same time more complex – more intensely blackcurrent or plum, with peppery overtones. We had already experienced the Pharos Reserva in May, at the feast of St Prosper in Hvar. Our earlier opinion was confirmed – it’s a wonderful full-bodied red in the south Mediterranean style that can be enjoyed with or without food. In fact, Mario suggested drinking it simply with a plate of the strong Pag cheese, and it did go really well with that!

The top-of-the-range Pharos Grand Cru has been like the holy grail of wine for us over the past couple of years. Since first tasting it at the Dalmatian Wine Expo, we’ve been unable to find it anywhere, except from the winery itself. And now they had no bottles either, oh no! In fact, we did see a very few bottles of the Pharos Grand Cru for sale in the Uje shop in Split for 499 kuna – that’s verging on $90.  Now we’re not normally given to spending that much on a bottle of wine, so you see how special it is that we should even contemplate doing so! The difference between the Reserva and the Grand Cru is the addition of Darnekuša for extra darkness and depth. But the Grand Cru hasn’t been bottled yet for this year. We had to be satisfied with a taste from the barrel (yep, we really do love it!), and a promise that if we came back in 2 weeks, they’d have bottles. In any event, the Reserva is a very fine wine in its own right, and we’re looking forward to our wine and cheese on the terrace tonight! 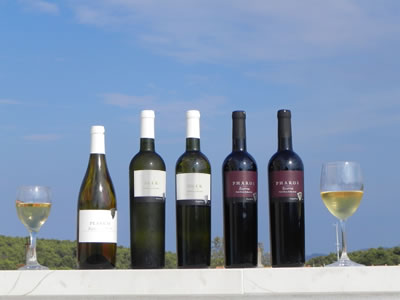 Our selection of Plančić bottles on the terrace wall!

We were also keen to try Plančić’s Prošek, which we’d noticed on their website. We’re partial to a glass of prošek after dinner, yet another fine Dalmatian tradition! Sadly, they had none left of their white prošek (made from Bogdanuša), though we did get to try the red prošek (made from Plavac Mali) straight from the barrel. As Antun described it, it’s still only half a product, and it needs considerably more time to develop. Very promising, though, I think I’m going to enjoy that when it’s ready to drink!