There are lions on Hvar. You can see them lurking on walls and gateways, looking out with a rather pained expression. It’s the symbol of St Mark, the winged lion of Venice, showing that this island was once part of the Venetian empire. From 1278, when the locals petitioned Venice for protection from the pirates, the town of Hvar was an important naval base,  a major hub of sea traffic in the central Adriatic.

The Lion on the Loggia wall has a beautifully curled mane

St Mark’s lion is a very distinctive heraldic symbol – one of the strongest branding logos of its day. It’s a winged lion, sometimes shown with a halo, resting one paw on an open book that contains the latin inscription Pax tibi, Marce, Evangelista meus. (Peace be with you, Mark my Evangelist) or some abbreviation of that.  Apparently in wartime, there was a more assertive variation holding a sword in one paw and the other resting on a closed book, for protection. Haven’t yet seen one of those on the island. 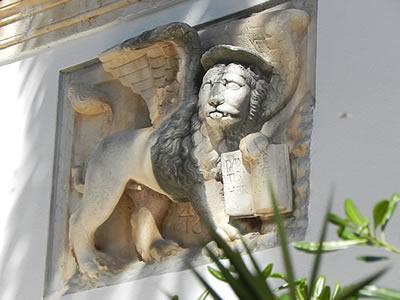 A second Venetian Lion, also on the Loggia wall, wears a halo and holds his book. Is he really sticking out his tongue?

It’s the faces on these lions that I find so appealing. Each one is different, and I wonder if the sculptors had ever even seen a lion? The rest of the body is a perfect depiction of a lion, but the faces seem very human, full of character, with a wonderful range of expressions.

A third Venetian Lion looks pretty appalled at what he sees

Outside of Hvar town, the lion is less in evidence. There is one to be seen in Vrboska, if you know where to look. The symbol of Venice was not as popular there, following the bloody suppression of the peasant rebellion by the nobles in the early 1500s. What’s left of the hated Venetian symbol can be seen on the wall of an old single story building on the north side of the Piaca.

Venetian Lion in Vrboska - or what's left of it

And lastly, here’s my own sketch of one of the lions, the one with the distinctly constipated expression!

My sketch of one of the Venetian Lions in Hvar town

One thought on “Lions of Venice”