It’s been an interesting Spring, rather wetter than usual, so we really appreciate when the sun comes out. That’s especially true when the forecast said clouds and rain, but outside the window we have a perfect blue sky! So it was on Thursday last week, and we took ourselves up to Pitve to hike the trail to the top of the island. There’s a lovely graded path, specially built as a donkey path to get to the vineyards on the southern slopes, long before the tunnel was built.The trailhead is signed “to Srakinj“, carved on a large lump of stone. Wonder where that is/was? As we climb, there’s a lovely view of the valley above the Pitve tunnel, covered with clumps of yellow broom. 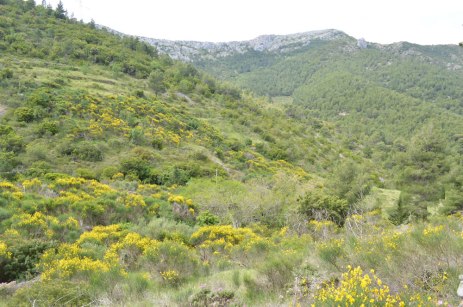 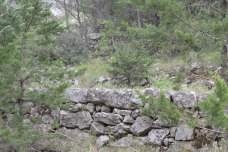 The path is covered in wild flowers, and we’re on the lookout for any different orchids, or indeed any other flowers that we don’t already know. At altitude, it’s possible they may still be in flower at the end of May. In this relatively untouched area, it’s a good hunting ground! 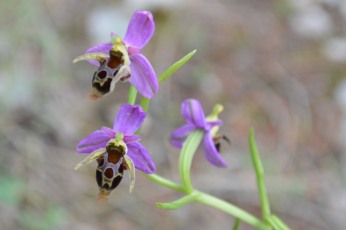 It appears to be thistle season! This particular variety, the musk thistle, is striking as the bud starts to open, with that deep pink heart set in a green rosette. The leaves are also painfully jaggy, as I discovered to my cost trying to get into the undergrowth to take photos! 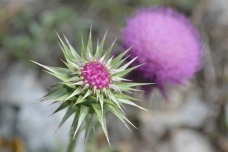 Towards the top of the switchbacks, there’s a fine view back the way we’ve come. The start of the road across the top can be seen snaking its way up on the other side of the valley. That is the “up and over” alternative for vehicles that can’t fit through the tunnel, or when that’s closed for maintenance. Our walking trail will meet up with the road shortly, as it comes round to join us on this side of the valley. 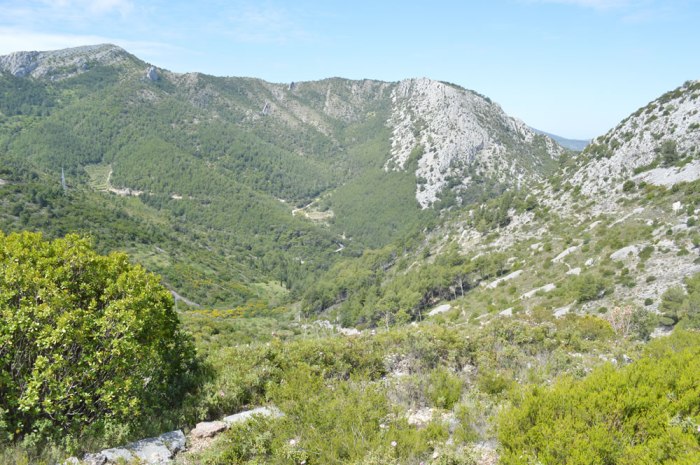 As we meet the road, we turn left and follow it up the hill. It’s really only a single track and it’s not as if there are many cars. Only one truck passed us in the time we were there. There’s more flowers at the top of the trail, and swathes of glorious blue sage everywhere! I was taking lots of photos as some of these plants were new to me, and I would have to look them up. 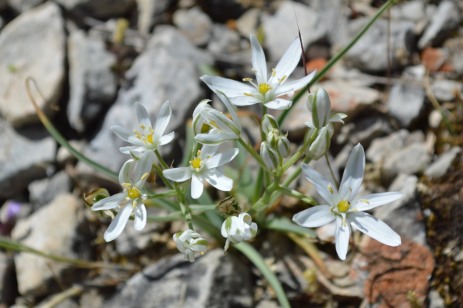 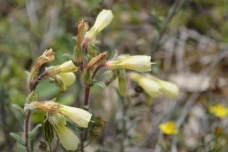 There’s been some buildings up here at one time, and fields marked out by drystone walls. Now it’s left to the wild plants, the aleppo pines and the flowers, particularly the cheery pink of rock roses. Looking north towards Brač, we’re high enough to glimpse the mainland mountains behind it.

Even the road is covered in flowers at this point! Looking east(ish), you can see the tail end of Brač, and the high mountains of the mainland with Biokovo behind a line of clouds. Now, isn’t this an inviting road to follow!

Road over the top

It’s clearly not always peaceful up here, though. This is hunter country, as shown by this hide by the side of the road. Fine views from there, and the patchwork construction makes for an interesting photo!

The views are glorious from up here, especially on such a clear sunny day. Here’s one of some impressive rocks showing how the sedimentary layers are now pushed up vertically. 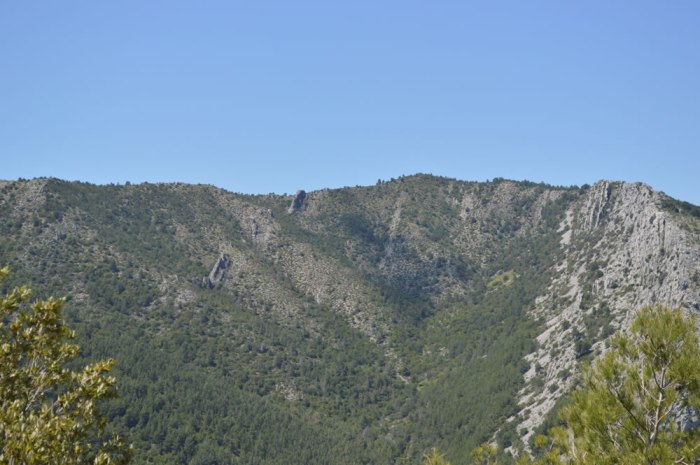 That’s about as far as we went on this day, but you can follow the road down the other side towards Zavala, back down to the Pitve tunnel by the long way round, or head further east towards Humac. Options to try another day! After our picnic, we headed back down the way we came, by the donkey trail.

Don’t underestimate the value of Doing Nothing, of just going along, listening to all the things you can’t hear, and not bothering. ~ A.A. Milne