There are over 300 Bronze Age hillforts around Istria, of which Monkodonja is one of the most impressive. Not simply for the glorious location  and the massive defensive walls, but the careful interpretive boards that really help you to visualise what it was like when it was inhabited. Monkodonja means Quince Mountain in the local dialect, though we didn’t see any signs of those. In its heyday (around 2000-1200 BC), the town had two rings of defensive walls, built from the stone blocks carved off the top of the mountain to make a flat surface. On three levels, the town was divided into the Acropolis (top and centre), surrounded by a wall, then the upper and lower town, all surrounded by the outer fortifications. Three gates gave entry to the town, of which two have been excavated.

As with many of the archaeological delights in Croatia, it’s a self-guided tour (including finding it in the first place). For the entire duration of our visit, we had this marvellous place to ourselves, free to imagine what it would have been like 3,000 years ago. The sympathetic restoration work of some of the walls really helps, as do wooden posts indicating how and where the shelters were constructed. And, of course, the views over the plain down to the sea were glorious!

Excavations show that the earliest inhabitants started around 2000 BC, hacking stone blocks off the top of the hill to make their fortifications, leaving a flat foundation for their houses. This being the bronze age, their tools must have been simple hammers and chisels, and of course, no wheels to move heavy rocks. No wonder they started at the top of the hill! After several modifications over the years, the settlement was abandoned in or around the 12th century BC, as the bronze age people disappeared for some reason that researchers are still working on. Within a period of 40-50 years so many cities in the eastern Mediterranean were destroyed, many of them, including Monkodonja, never to be occupied again. This site was completely overgrown when it was discovered in the 1950s, and must have been a serious excavation project – and how exciting! 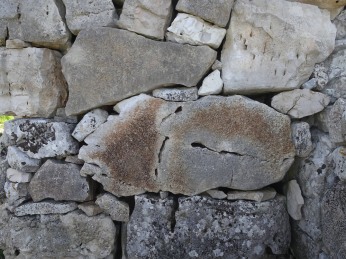 We started our tour at Monkodonja’s main gate, which in its final version had two gateways connected by a narrow corridor. On either side were storerooms. Outside the walls, two graves were found, clearly of important people, of carefully carved stone, covered with massive stone slabs. They may even have been the founders of the settlement.

West gate – from outside

Inside the gate, we’re in the lower part of town, where it seems the ordinary folk lived – farmers and herders. For these people kept livestock and grew crops, in addition to hunting, fishing and foraging for food. Cereals, legumes and (amazingly) quantities of grape pips show what these people were eating and drinking before the Greeks arrived! The houses in this area are quite small, with wooden supports, branches and mud on the walls and  thatched roofs. Inside would be an oven, open fireplace, and furniture, while outside was a small porch and a reservoir  to collect rainwater. Up against the big defensive walls were long narrow storage rooms, where various products and food supplies were kept in large ceramic pots. Based on the density of the housing, it’s been estimated that there were as many as 1,000 people living here at one time.

Futher towards the centre of the hill, we find the Upper town where the craftsmen and traders lived and worked. Along the wall with the Acropolis was a row of lean-to buildings with foundations partly made of stone, and support walls of wood and branches held together with mud and thatch. These appear to have been artisan workshops of various types, given the bone tools (needles, chisels, awls, planes, etc), that have been found, as well as small lumps of bronze and lead with pieces of metalworking moulds.

Artist impression of a shelter

And through a narrow gate in another wall, we get into where those and such as those lived – the Acropolis. This would be where the founders of Monkodonja and their descendants had their rather larger multi-roomed houses, surrounded by more storerooms, narrow passages and large  covered porches. Multiple postholes in the foundations indicate several stages of construction and restoration of these buildings. House walls were often decorated with simple geometrical patterns printed into the fresh clay or mud.

Gateway between the upper town and the Acropolis

The northern gate originally had a tall tower built from the same massive stone blocks as the outer walls. Along the inside of the wall were rooms with arched walls. Out from the gate, a narrow winding pathway of vertical stone slabs leads down to the cult cave at the foot of the hill. You could imagine this was some kind of processional way – or was it simply a way to deter intruders?

Outside the wall, not far from the north gate, a deep (50m) cave appears to have been a place to hold rituals. The entrance to the cult cave has been terraced, and a row of vertical stones set on the western edge. Towards the hillfort are shaped stone blocks with horns that were probably used as thrones from where the rites were directed. The cave is pretty much filled with rock and debris today, though it’s carefully fenced off to prevent the unwary visitor from falling in. 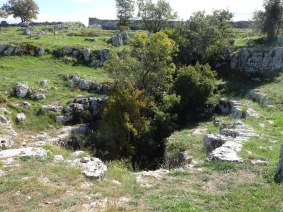 The best of Monkodonja’s excavated pieces can be found at the Archaeological Museum of Istria in Pula, including some fascinating works of art with scroll designs. Called “enigmatic tablets” in English, the jury is still out on the purpose of these little ceramic or stone objects, whether they may represent a calendar, accounting records, talismans, or even a kind of early proto-writing. Found across southern Europe, whatever they were used for was important enough to trade across great distances, and tells us that the Monkodonja folks were part of a wider network of Bronze Age settlements. 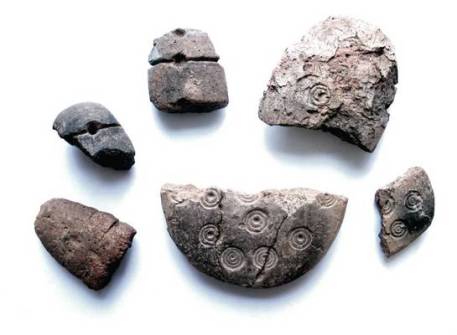 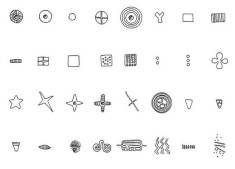 Thanks to the Archaeological Museum of Istria in Pula for the beautiful images. Our next trip to Istria really must include an afternoon browsing their collections!

Next, we’re off to another Istrian town that was abandoned somewhat later – medieval Dvigrad and its castle.

Archaeological Museum of Istria in Pula – Enigmatic tablets in Monkodonja