One of Istria’s most iconic towns is the lovely Rovinj, which we last visited as students many moons ago. In going back, I was a little afraid that the intervening years and busloads of tourists would rub the magic off my carefree happy memories of the place. But as it turned out, Rovinj in September is not swamped, just pleasantly bustling with lots going on and plenty to see. We happily wandered around the cobbled streets, revisiting the old town and taking in the atmosphere. 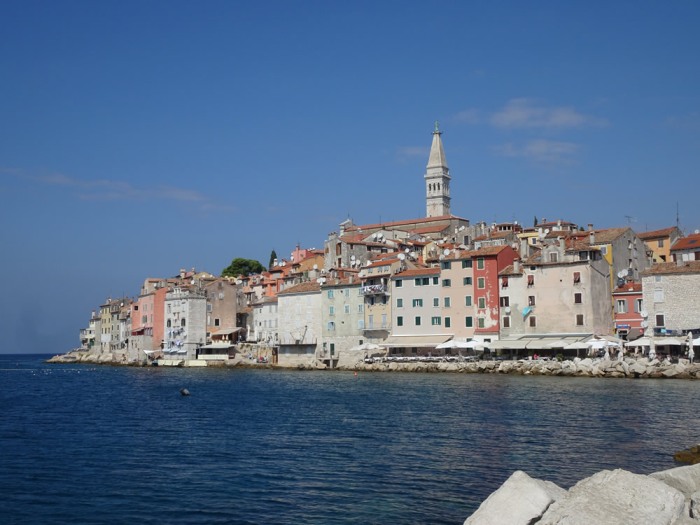 On our first night, there was a parade of vintage cars lined up along the waterfront, all beautifully polished and immaculate, members of the Pula oldtimer club. We met them again later in the evening, as they wended their way through the narrow streets of the old town, all the way up to the church at the top. I didn’t even know you could get cars up those streets! Sadly, I didn’t have my camera along that evening, so you’ll simply have to imagine us pressing ourselves against the wall as they passed! Here’s an archive pic from the oldtimeri website to give you the idea…

Next morning we started out at the Batana Museum which celebrates the traditional Rovinj fishing boats and their way of life. They’re not as rounded as the Dalmatian gajetas, and these boats seem to be mostly lug-rigged, or simply rowed around the harbour. The museum had a lovely feature wall of images of the Rovinj registered boats, starting with RV1. I’d love to see that for our local JL, SG and HV boats. Maybe I should start a project, and see how many I can collect! 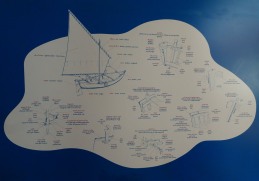 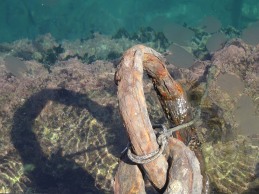 Associated with the Batana Museum are other, more intangible parts of the local heritage. For instance the music, which is distinctively different from other parts of the Croatian coast. The traditional bitinàda songs are performed using voices as musical instruments accompanying the lead singer. It’s a lovely lively style of singing, with beautiful harmonies, and I’ll swear there’s someone in the back there squeezing a cat! Here’s a soundbite from the Marco Garbin Cultural Arts Society as they sing Li ven soûn par li Caòale.

The language of the songs is Istriot, once common around this area, but now only spoken in Rovinj (Ruvigno). It sounds like a version of Italian or maybe Venetian to me, but is actually older, and is based on vulgar Latin. Officially, there are two languages in Rovinj, Croatian and Italian, which we are of course respecting in the title of the blog! The windrose on the small pier gives the names of the winds in Istriot –  N: tramuntàna/tramuntanì, NE:  grìgo (bura), E: livànte, SE: siruòco, S (sharp wind): uòstro, SW (hesitating wind): garbeîn / garbinasso, W: punènte / punantàda, NW: maìstro/maistralòn (mistral). 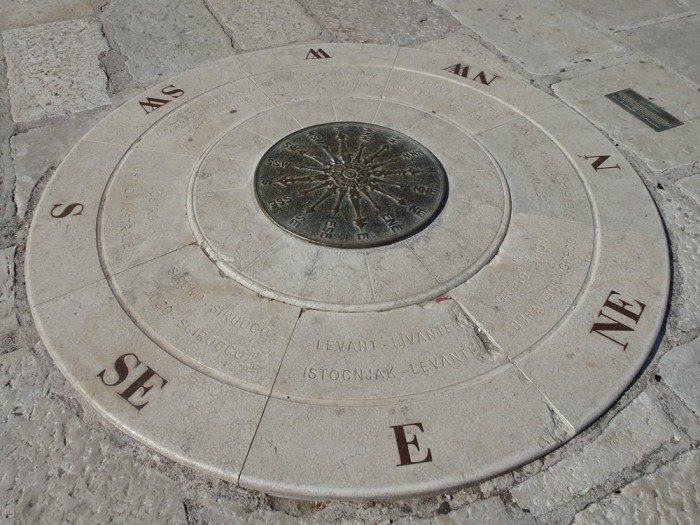 The Romans were here, building Castrum Rubini, one of a line of fortified settlements on the Istrian coast. It was a good defensive position – from the sea it was protected by a rocky shoreline, and from the mainland by high walls. After a fairly unsettled time up and down the Istrian coast, in 1283 Rovigno came under the protection of the Venetian Republic. The next (largely peaceful) 500 years saw the town enjoy a prosperity boom. Artisans, merchants, and sailors appeared alongside the existing fishermen and farmers. Around the streets of Rovinj you’ll see some wonderful old houses, which in the old town tend to be really tall and narrow, space being at a premium. The medieval design of overhanging the upper stories beyond the lower floors is much in evidence. 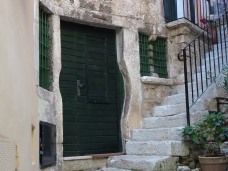 Wide as a barrel? 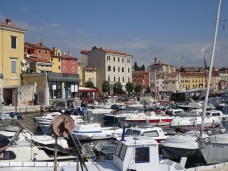 Overhang in the old town

In black and white

A lovely feature of the Rovinj streets is the number of local artists and artisan galleries to be found. A couple that we particularly enjoyed were a gallery of raku pottery, and a cooperative of ladies with their beautiful hand-made jewellery. It’s very special to be able to buy artwork directly from the people who make them.

Part of our reason for being in Rovinj this year was to be found in Montalbano street, where Monte restaurant has received a Michelin star. We’ve heard really good things about the food there, and were keen to visit, especially as they offer an entire vegetarian gourmet  menu! We’ll need a separate blog to do justice to the sublime food… stay tuned for that!

Monte – and a rather curious character!

At the top of Rovinj stands the baroque church of St Euphemia and St George. Its tall, elegant bell-tower is the exclamation point that makes Rovinj such a wonderfully picture-perfect town. The copper statue of Euphemia on top of the tower (replacing the older wooden one which was destroyed by lightning) is designed to rotate with the wind, so local folks get their weather forecast from on high.

In Rovinj’s early days, a small church dedicated to St. George stood on this site. But when St. Euphemia’s sarcophagus miraculously floated onto  shore in the mid-10th century, a new, bigger church was built and dedicated to her. It was all rebuilt on a much grander scale in the 1700s, and fairly dominates Rovinj’s skyline. St Euphemia herself lies in the sarcophagus behind the altar, having been returned by the Genoese, who briefly stole her in 1379. 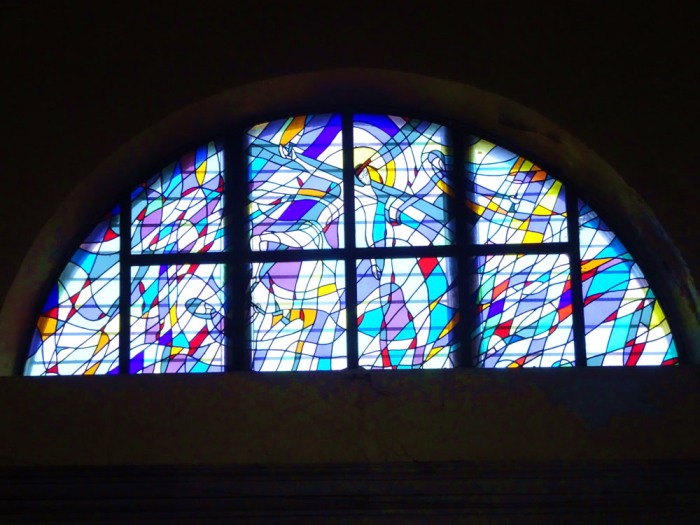 Rovinj was once an island, with a bridge across to the mainland. It’s hard to see where that was now, but it lives on in the name of Bridge Square. When the “canal” was filled in in 1763, the whole area was paved over to make a fine piazza, and around the same time, the gates to the old town were rebuilt, moving the 15th century Venetian Lion from the bridge tower across to where we now find him on the clock tower. He’s apparently rather unusual, as Venetian Lions go, for being a bit ballsy! Meanwhile, it now being safe to do so, the town expanded on the mainland side, and there’s some fine old buildings from the Austrian Empire. We went looking for the Vladimir Nazor school, built in 1819-40, and attended sometime in the 1960s by himself when he lived in Rovinj. That was our other reason for visiting! 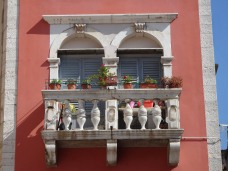 The sunset from the far end of Rovinj is a glorious highlight to our evening walk. The cobbles can be a little tricky, especially in the lower light, but they look great, and polished by so many feet over the years. Time for a little breather before a second day of sightseeing out and about the local area. 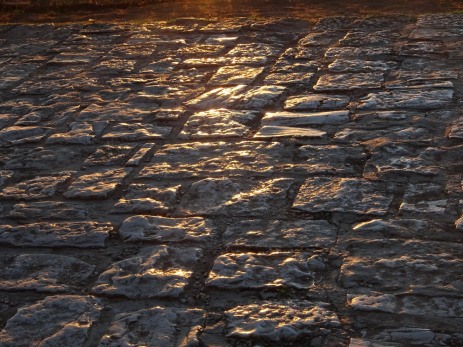 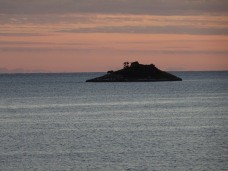 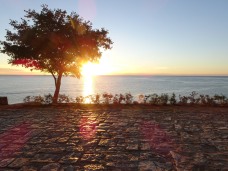 And lastly, you never really know a view until you try and draw it! 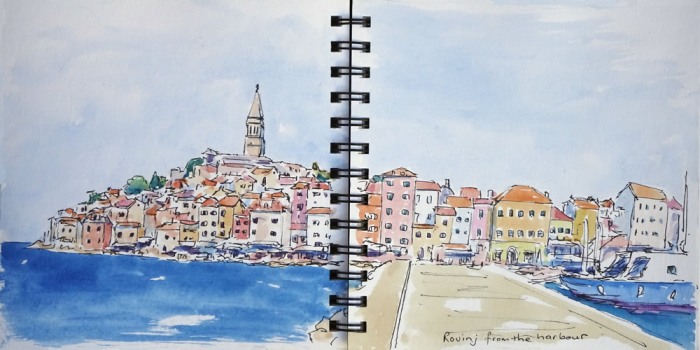 My sketch from the harbour

Next up – a gourmet dinner at Monte!