Our normal mode of driving north from Hvar is to take the inland motorway. It’s fast and easy, and we’re usually on our way to Zagreb with no time for scenic diversions. But this May we treated ourselves to a more relaxed trip up the magistrala, that wonderfully scenic Croatian coastal road. Setting out from Hvar on a rainy Saturday morning, the clouds gradually cleared as we drove past Trogir, with the road pretty much to ourselves.

Coming up towards Primošten, we spotted a large boatyard backed by a spectacular pattern of drystone walls. This was Bucavac, known for good reason as “stone lace“, and looking just like an Oton Gliha painting. (Note: Bucavac is pronounced “Boots-a-vats” as in Croatian “c” is actually “ts”.) These are not terraced vineyards, as is more common elsewhere on the coast, but a regular grid pattern of walls marking out fields across the entire hillside. We stopped to admire, and take a few photos.  In these vineyards grow the grapes for Suha Punta winery, which we planned to visit later in the day.

Over the next rise, we had a glorious view of the lovely town of Primošten looking for all the world like it was just floating out there. These days the old town is attached to the mainland by a causeway, but in the past this was an island with a drawbridge that could be pulled up at night providing safety for the good folk of Primošten and their livestock. The coast was a dangerous place to live with the Ottoman Turks about! 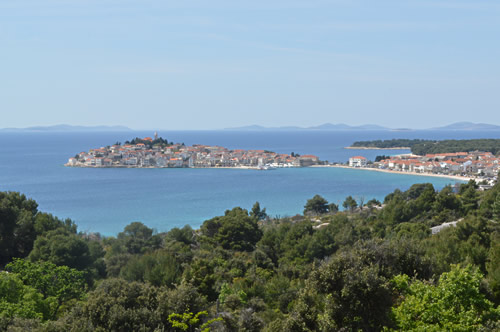 Primošten – what a beautiful setting!

And zooming in a little further for a little closer view of the houses – very serene, isn’t it?

The streets in old town Primošten are narrow and either go directly uphill, or wind around the outside of the island. On the main street, there’s an art and metal gallery with a rather interesting chap climbing the wall. Now that’s something you don’t often see!

Some nut climbing the walls!

This medieval town has more the feel of a village as you continue up the hill. At its core are are not densely packed townhouses, but rather low-key rural buildings with stone roofs and outbuildings, set in parcels of land big enough to grow vegetables, keep chickens, etc. You get a feel for what this might have been like to live in, 400 or 500 years ago. Some of this has not changed much, except perhaps needing a little maintenance by now.

The church of Sv Juraj (St George) and its associated graveyard crown the island. This is the prime position on the island, with the best views. I suspect the church tower would have doubled as a watchtower, back in the day. There was a funeral on the afternoon we visited, with a slow procession of townsfolk wending their way up the hill, singing, towards the last service before burial.

The graveyard surrounding the church has wonderful views over the sea and nearby islands. It’s serene and peaceful here – what a beautiful place to spend eternity! 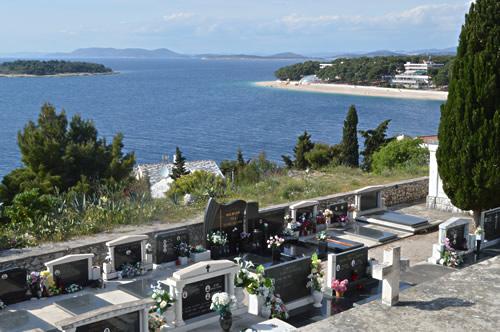 A beautiful place to spend eternity

Our lunch is an impromptu picnic in the park with found items from the local Konzum. Croatian supermarkets don’t generally have sandwiches for purchase, so you need to find something equivalent – in our case burek (cheese-filled pastries), fruit, crisps and a Mars Bar. Very healthy lunch followed by a walk on the beach! Primošten prides itself on its beaches, and it is lovely there, especially if you get away from the popular tourist section with the cafes and bars. It is, of course, pebble/gravel rather than sand, but that does leave the water beautifully clear. No paddling today, though the water looks very inviting!

Suha Punta winery is tucked away in Varoš, a narrow street in the mainland section of Primošten. In May it’s not yet set up for visitors, later in the summer they’ll have tables and benches in a shady courtyard for wine tasting. On the wall of the winery is a mural of that distinctive vineyard of Bucavac, and sommelier Maja Vehovčić tells us about its history and what makes it so special. Vines have been grown there for centuries, dating right back to the Illyrians, before the Greeks and Romans took over cultivation. One entire row of fields from the top of the hill to the bottom is known as a tirada, hence the name of their wine! Traditionally, as the vines reached about 75 years old, they would be torn out, to be replaced with olive trees. So over time, there came to be more olives than vines. 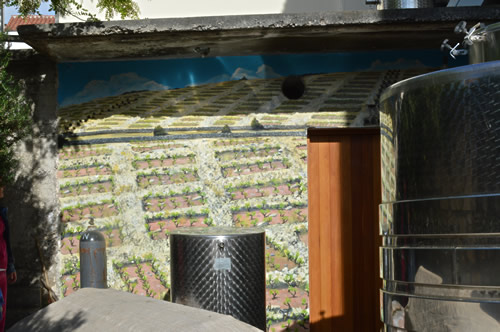 Following  the Second World War, what with depopulation and the disruption of wartime, Bucavac hill was largely abandoned. In an effort to revitalize the local economy, there was a lottery for ownership of the land, and a push to replant the vineyards once again. The only grapes grown there are babić, which is a varietal exceptionally well suited to the conditions.  The fields are very rocky and there’s not much soil – or water either for that matter! The headland is known as Suha Punta (literally Dry Point), as for some reason it doesn’t get as much rain as the surrounding coast.

The vines planted in the 1940s are now over 60 years old, and known for their exceptional quality. Suha Punta winery is a small operation, producing three different wines, all made from babić grapes. They own some land (around 1.5 hectares) on Bucavac with old vines, and have planted some new vineyards in the hinterland also. They also buy selected grapes from other growers on Bucavac – also old vine babić.

Winemaker Leo Gracin is a professor of oenology in Zagreb, and he consults for other wineries in Croatia, most notably Stina on Brač, and he also works with young up-and-coming winemakers, such as Birin in Vodice. 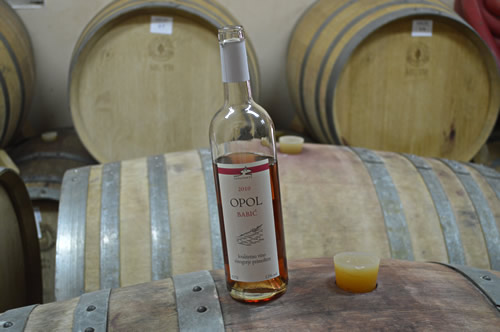 The Suha Punta Opol rosé is a favourite of ours, aging really well – we’re still drinking and loving the 2010! It’s made two-thirds in steel tanks, one-third in barrique, which are then mixed for bottling. It’s that barrique third that gives this rosé its long life, still fresh-tasting after 6 years. Sadly they don’t make it every year, and there will be no 2011 or 2012 Opol. The next to be bottled will be 2013. Looking forward to trying that! 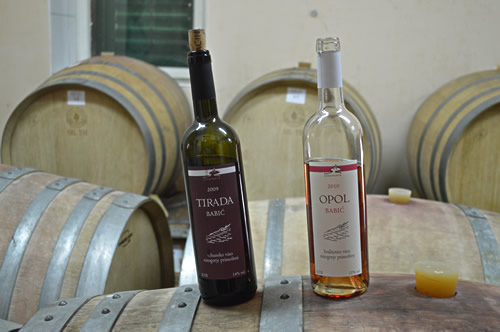 Their standard red wine is Tirada – intended as a good quality everyday wine, but is so good that it received the higher quality “vrhunsko” rating. It’s very smooth and enjoyable. Babić produces a lighter wine than Plavac mali, and this would pair well with fish and vegetable dishes in the same way as a Pinot noir.

Top of the range is the Gracin Babić, rather more complex than the Tirada. There were no bottles left of the previous production, so we tasted the new wine from the tank, the 2011 harvest which is ready to be bottled soon. By now it’s spent 24 months in barrique. The flavours aren’t yet integrated, but it’s very promising. There are red fruit and peppers, and strong tannins.

And finally, on to the dessert wine – prošek tasted from the barrels – currently in two parts which will be blended to create the final product. One part is more acidic, the other sweeter. This is a true straw wine, with the grapes dried on racks for approx 2 weeks before pressing. It has lovely flavours of raisin and spices. We’re looking forward to trying the bottled prošek!

After our tasting, it’s back into the car for the short drive up the coast to Šibenik, where we’ll be staying tonight.

And here are my sketches from our day in Primošten…

My sketch of Primošten

And for those in the U.S.A., Suha Punta wines are available from Blue Danube Wine: www.bluedanubewine.com/winery/suha_punta/

One thought on “Exploring the Dalmatian coast – Primošten, Suha Punta wines and the vineyards of Bucavac”