Furešti u Dalmaciji – Foreigners in Dalmatia – was a wonderful wine-tasting seminar given by the Taste of Croatia team – Goran Zgrablić, Morena Zibar and Lada Radin, with a special guest appearance by Miquel Hudin. The foreigners, of course, refer to grape varietals that are recent incomers to the region – chardonnay, merlot, cabernet sauvignon, syrah, grenache, etc – and are now being grown alongside the indigenous varieties. 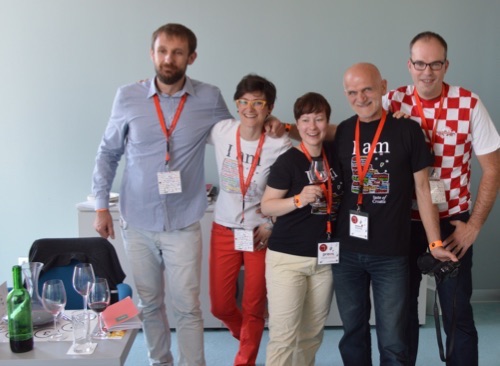 The wonderful Taste of Croatia team

Prović Chardonnay 2013
From the delta of the Neretva where you still find shells in the soil from some time past when this was under the sea. Aromas are of tropical fruit. The taste is very dry, spiky, not very acid, with a slightly minerally bitter finish. A classic chardonnay would be very difficult to produce on the coast, but the Neretva delta has its own microclimate, not as hot and dry, so this is a nice, light summer wine.

Krolo Chardonnay barrique 2013
This one comes from the Cetinska Krajina, over the mountains behind Omiš. It has a similar aroma to the Prović, but softer. This is a more typical chardonnay, which is surprising for Dalmatia, but not if you look at the map. Definite tannins,nice subtlefruit, and a more restrained taste, slightly bitter on the finish. Coming back to it after some time in the glass, we found the Krolo had developed really nicely. smokey, vanilla aromas coming out. This is a confident wine! 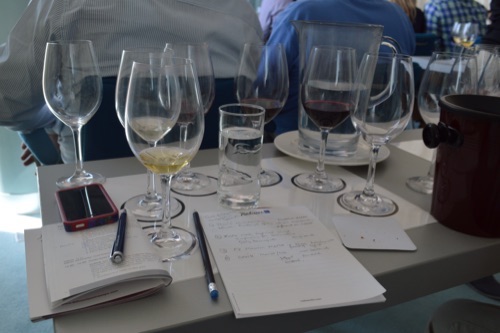 To set the stage for the reds, we were now presented with a very tasty snack prepared by Dalmatia’s guru of fresh cuisine, Čedo Kovačević. He referred to it as a “pizza snail“, which is lovingly created from fresh ingredients to provide seven separate flavours combined into a bite-sized snack. Here’s his description: the base is pizza dough rolled out, smeared with anchovy paste and powdered lemon balm, then rolled up and sliced, before being cooked in the oven. On top of the base is spread Čedo’s special homemade lemon jam, then a slice of courgette which has been cooked in a wood-fired grill. Topping that, we had a dod of tomato šalša, garnished with a sprig of fresh fennel. Looked beautiful and tasted sublime!

PZ Masvin Merlot 2013
From the Benkovac area in northern coastal Dalmatia between Zadar and Šibenik. Lightish red in colour, with a red fruit aroma. In this hot climate merlot produces big, fruity wines, this one is 15% with flavours of maraska cherry, dried fruit, prunes, and earthy undernotes.

Crvik Negroamant Merlot/Cabernet Sauvignon 2011
Moving to the far south of Dalmatia, this comes from Konavle, the region south of Dubrovnik. It’s a dark opaque red with aromas of ripe forest strawberries, spices and mediterranean herbs. In the mouth there are ripe tannins, restrained wood and dried red berries with a touch of liquorice and pepper. Well balanced, broad taste.

Korlat Cabernet Sauvignon 2010
Moving back north to Benkovac again, this is a very dark red, almost violet cab. Aromas of tobacco and leather, plus tart red berries. Grown in a vineyard that’s mostly rocks rather than soil – Benkovac of course is known for its stone quarries, as well as its wine! Initial taste is slightly sweet, almost demi sec, rounder and with restrained fruit and hot pepper. Nicely integrated tannins.

Tomić Caplar 2009 – Cabernet Sauvignon /Plavac Mali blend
From Hvar, the cabernet sauvignon is grown on the small island of Sv Klement. The grapes are fermented separately, then spend 6 months in barrique. Colour is a russety transparent red, with aromas of oak, leather and tobacco with fruit almost hidden. Taste is predominantly Plavac, as that makes up 70% of the wine.

Bibich G6 Grenache 2012
From vineyards planted in the 1970s in the flatlands behind Zadar – known as Ravni Kotari. Colour is very purple, and the aroma is of strawberries and red fruit. Elegant taste with good acidity balanced with restrained fruit. There’s a sea influence to the flavour. It’s pretty strong at 15% but hides the alcohol well.

Kuća Glavić Syrah 2013
In this case the grapes are grown in Konavle way down south, but then somewhat mysteriously refrigerated and trucked to Istria for processing! Dark red in colour, but still transparent. Lovely fruity nose of rosehip or redcurrant with a touch of smoke. Minerally taste and bitter herby mint aftertaste. You could believe this light red syrah is white wine if tasting blindfold!

And there was an unexpected addition to the published wine list!
Kovačević Cellars Merlot rosé 2013
This wine is from the Kaštela area, near Trogir. Lovely bright rosy colour, with a floral aroma and light fruit. Semi-sweet taste rather than completely dry. Very pleasant and light for a summer afternoon drink. Čedo, who is the winemaker, explained that his wife is also a foreigner, and prefers her rosé less dry.

The Taste of Croatia team do an outstanding job of promoting the very best of Croatian food and wine, and we always enjoy what they come up with! These people all have day jobs, and spend their free time writing and presenting on a subject they are passionate about. To find out more, follow the links below. And, by the way, I’d love one of their aprons!