Hvar is not just the island of sun, wine, and nude beaches. Because of its lush vegetation and plentiful water, it is an important staging post for migrating birds, and many of them spend the summer here. The lack of pesticides on the island is also a big factor in keeping the bird and other wildlife population healthy.

It is springtime on Hvar and the birds are returning. Two weeks ago the first swallows came. Another week later the swifts, just a few days ago the bee eaters. More about the bee eaters soon, but let me tell you about the hoopoe.

I have not yet  seen a hoopoe yet this year, but have heard the unmistakable hoop, hoop, hoop, hoop. Normally a shy bird, a while back we were lucky to spot one in the ancient Roman ruins of Salona. Completely unconcerned, he was more interested in stuffing his face with bugs from the grass than worrying about us. 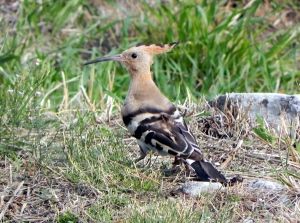 Hoopoe in the Grass

The hoopoe (Upupa Epops) is the only extant species in the family Upupidae. Rarely seen in Britain, they are not uncommon in Croatia and other Mediterranean lands, even as far north as Poland. For trivia buffs, the hoopoe is the official state bird of Israel, despite not being kosher! Aristophanes called it the “king of birds” in his comedy The Birds.

Listen to the hoopoe:

Here is a link to the Wikipedia article about the hoopoe

One thought on “Birdwatching on Hvar: The Hoopoe, King of Birds”