We walked up to Sv Nikola yesterday, that’s the island’s highest peak. I won’t try to pretend that we walked all the way up, in fact we drove most of the way. The road leads up from the end of the Selca tunnel, the turning nicely signposted. The larger, more noticeable sign is for Kolumbić Agroturizam which was closed in January, but is apparently excellent. 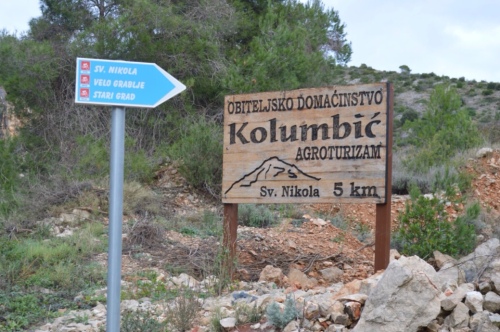 The road to the top of the island is unpaved, but in very good condition, wending its way past lavender fields, old walled terraces and some newer olive groves. 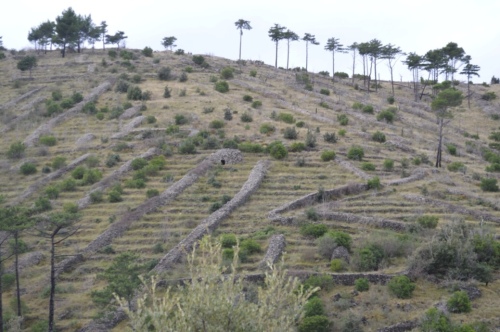 As you go higher, the views get more amazing. The pattern of the old stone walls extends in all directions, each mound representing back-breaking work for the farmers and their families over many centuries.

There’s rosemary in flower by the roadside, now growing wild, but perhaps remnants of cultivated rosemary from times gone by. Both rosemary and lavender essential oils were big business here. 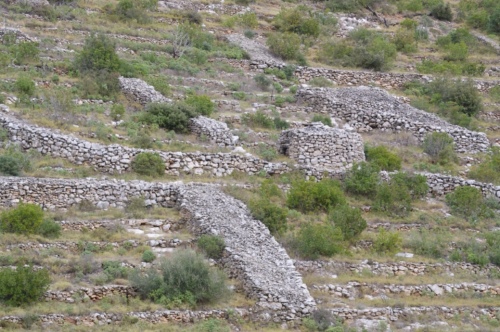 Set amongst the lattice of the drystone walls are trims, the local form of traditional field shelters. Nowadays they’re mostly used for storing tools, but when people had to walk up here to tend their fields, they were useful for overnight stays.

Amongst the derelict fields we see some recently worked vineyards. The newer plantings tend to be arranged in straight rows, while older growth vines stand out as knarled, twisted stems. At this time of year, everything is neatly pruned.

The view back towards Vis shows the shifting weather pattern. The clouds are continually on the move, allowing gleams of sunlight to chase across the water.

Up here in the higher reaches of the island are the remnants of the black pine forests that used to cover this area, dating back to the ice age. They don’t recover well from fires, so gradually other bushes and shrubs have taken over.

We’re heading for the highest point on the island, the peak of Sv Nikola. It’s clearly signed, and has a cross on top, can’t miss this one!

Following yesterday’s rain, the air is fresh and clear, giving a wonderful view over to the mainland. Down below us in a dip in the landscape we can see the village of Dol.

As we climb higher, we can see north to Bol on the neighbouring island of Brač. It’s very pretty as the sun catches it. The sea looks so calm today.

Towards the mainland, we can pick out details on Biokovo. That’s one big mountain!

We park just beyond the agroturizm complex, and walk up the final stretch. At this point it looks pretty clear, though we can see darker clouds to the south over Korčula. 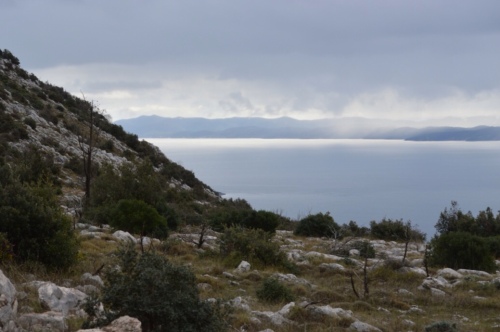 The last section of road is fairly steep, and there’s actually a reasonable car park at the end of it. There’s some impressive rocks here, great subjects for a painting!

Immediately to the south we have a lovely view down the slopes to Sv Nedjelja, and the winery and tasting rooms of Zlatan Plenković.

The vineyards on the south slopes look so steep from here that you wonder how they ever manage to cultivate them!

We reach the summit as the weather unexpectedly closes in on us from the east. It’s not quite what you’d call rain, but more of a clinging drizzle as the cloud envelops us. We take refuge in the doorway of the small chapel and sign the book. 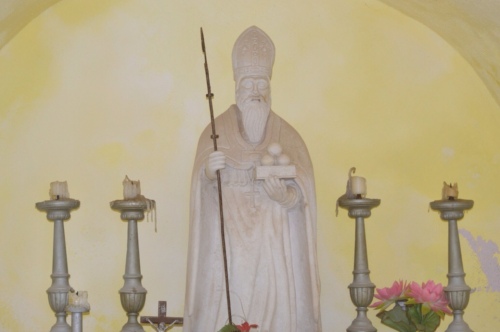 Sv Nikola himself, I presume, presides over the inside of the chapel. At the door there’s a badge you can imprint to commemorate your achievement in reaching the top. 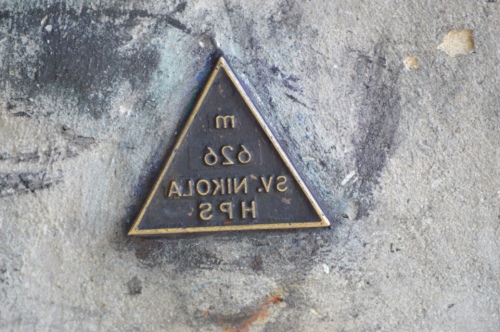 Of course, when rubbed on paper, it comes out the right way!

It says 626m Sv Nikola HPS. That’s 2,053 feet if you’re still counting that way, as I do. HPS is the Hrvatski Planinarski Savez, the Croatian Hikers Association. 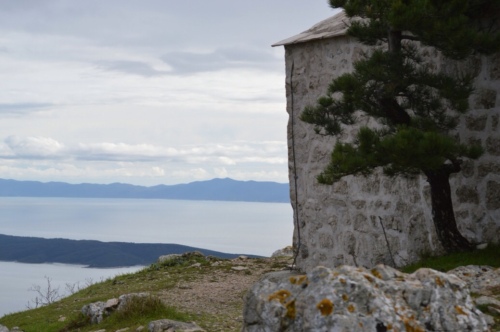 As the clouds move away, we resume our magnificent views, and try to work out which islands are which. To the south we have Ščedro in close, and Korčula further off. 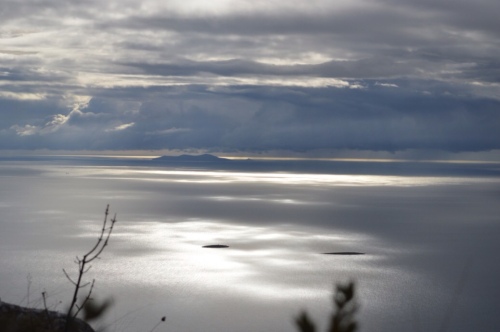 Directly south in the distance is an unfamiliar island, Sušac, sporting a heavy black cloud over it. Between here and there, the sun catches the water for a beautiful, silvery effect.

On the way back down to the car, we notice a an early crocus peeking through the grass – pretty!

The cloud having passed over, our mountain has some sunshine! Unlike the mainland, which is increasingly covered by now.

The Kolumbić Agroturizm complex looks very interesting, lovely in the sunshine and what a glorious location! We must come and investigate when it opens for the season.

We head back down taking the road towards Svirče. It’s a bit rough in places, and we have to take care around some deep potholes, but is otherwise fine. Modern cars are not as practical on rougher tracks, not having quite the clearance of older models!