This morning, at Total Hvar HQ in Jelsa, we were treated to a behind the scenes look at the filming of Total Hvar’s language lesson series. If you haven’t been following along as the Professor gives us the benefit of his expertise in the Hvar dialect, you’ve missed one of the cultural highlights of the island!  This morning’s subject was vegetables, and our two language experts explored the difference between standard Croatian, and the local Hvar version. 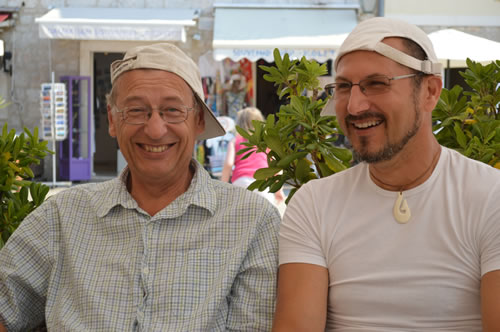 Our panel of experts – Zdravko with the Professor

Our expert today was Zdravko, a native Croatian speaker from Zagreb, and very knowledgeable in the field of vegetables. Although, of course, as he will tell you, he generally prefers meat!

Before filming, there was much serious debate as to which vegetables best demonstrate the essential differences between the words. And, as an innovation for episode 13, it was felt that the introduction of a visual aid would help to get the message across. Zdravko went off to the greengrocer, and returned bearing an aubergine. Of course, the English language itself has its own variations, and this would be an eggplant in America. But back to our Croatian experts… 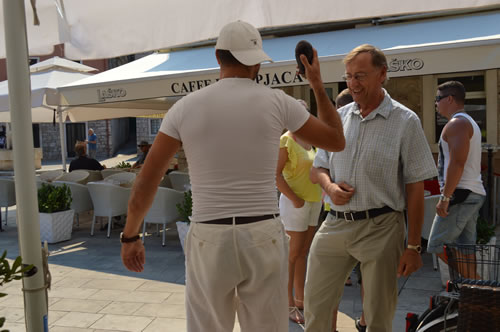 The Professor practises his moves

The Professor practised his moves, and both experts rehearsed their selection of vegetables. Meanwhile, our videographer and narrator in the form of Mr Total Hvar himself checked lighting and angles while at the same time writing his script. At last all was ready and it’s 3… 2… 1…

In classic fashion, as filming started and Paul began his narrative, the 12 o’clock bells pealed in the nearby cathedral. It’s a natural hazard of filming in Jelsa’s main square, and one that they’re quite used to. 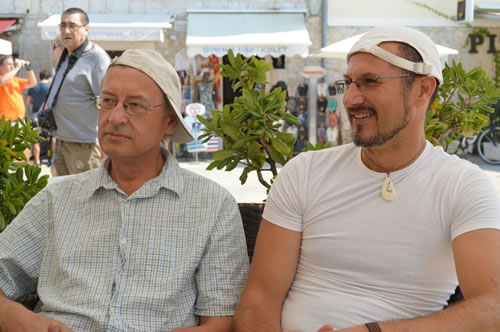 Unfazed, the professional team continued, and the lesson concluded with a very smooth move by the Professor to stress the Hvar version of the aubergine. Belanzana – something for us all to practise! 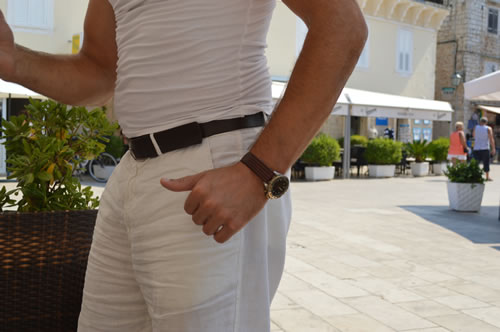 Many thanks to the Total Hvar team for the educational and thoroughly entertaining morning!

You’ve read the background, now enjoy Lesson 13: Vegetables, Aubergines and a Cute Butt for yourself on Total Hvar!

One thought on “A Language Lesson with Fresh Vegetables”