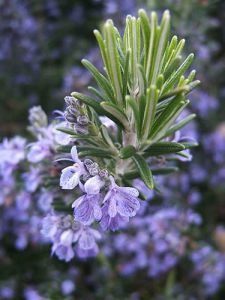 One of the delights of Hvar is the variety of aromatic plants that grow naturally here. The island is well-known for its lavender (lavanda), but for many centuries, rosemary (ružmarin) was more important to the island’s economy. Rosemary is actually a close relative of lavender, both belonging to the Lamiaceae (mint) family of plants. The name “rosemary” is not, as I once thought, a simple combination of two girls’ names. Rosmarinus officinali, to give it its proper botanical title, actually derives from the latin ros, meaning dew, and marinus, from the sea. This Mediterranean  plant has the seeming ability to survive periods of drought by collecting moisture from the sea air around it.

These days, you’ll find rosemary in gardens all round the world and most people probably have the dried version in their spice rack in the kitchen. Rosemary is great in cooking, adding a wonderful aromatic flavour to almost anything from soups and sauces, to grilled fish and meats. We particularly like to add sprigs of fresh rosemary to food on the barbeque, and when roasting vegetables and potatoes in the oven. Yum!

Rosemary has long been considered a medicinal herb as a treatment against many ailments. And recent research has confirmed that it does indeed have many beneficial ingredients. Rosmarinic acid, along with essential oils such as camphene, cineol, borneol, bornyl acetate and other esthers are found in the leaves and especially the flower tops. These compounds have a variety of extremely useful properties such as anti-inflammatory, anti-allegic, counter-irritant, anti-bacterial and anti-oxidant to list but a few. Fresh rosemary is a natural source of many vitamins, such vitamin A, B-complex groups (folic acid, pantothenic acid, pyridoxine, riboflavin), vitamin C, and vitamin E. It’s also a rich source of essential minerals such as calcium, copper, iron, manganese, magnesium and potassium.  So with all those components, it’s no wonder that you’ll find some pretty strong arguments for the benefits of rosemary, both as a fresh ingredient and as an essential oil.

As the plant is known all over Europe by very similar names, it seems likely that was the Romans that spread it northwards, as they did with so many good ideas. The Greeks in their time,  also used rosemary, dedicating it to Aphrodite, the goddess of love and beauty. Possibly because of that, in the Middle Ages, it was customary for brides to carry a sprig of rosemary as a symbol of love and faithfulness. Sometime in the 14th century, Hungary Water or the Queen of Hungary’s Water was created, the first modern alcohol-based perfume. Reputedly ordered for the beautiful Queen Elisabeth of Hungary, the earliest recipes called for distilling fresh rosemary with brandy. Its use spread all across Europe, and for many centuries Hungary Water was the most popular fragrance and remedy. Rosemary also came to symbolize remembrance, and was associated with life’s major events, such as funerals. Which is what Ophelia referred to, in Shakespeare’s Hamlet.

Rosemary growing in the renaissance garden of Hanibal Lucić

On the island of Hvar, rosemary gets a mention in the 16th century works of local poet Petar Hektorović. He would have grown it as one of the herbs in his medicinal garden at Tvrdalj in Stari Grad, as would Hanibal Lucić slightly earlier, in his renaissance garden in Hvar. It was  grown in many a monastery or medical garden at the time. In 1717, “Aqua della Regina” was sent to the island of Vis for the treatment of asthma. One of its primary ingredients was lavender oil. Lavender and rosemary are both mentioned in documents of the late 1700’s, with one letter from 1786 confirming the sale of rosemary from Brusje. The annual production of lavender on the island at that time was about 80 barrels. As the popularity of rosemary products grew, by the 19th century Hvar was exporting beyond Europe, to the United States and Brazil.

The village of Velo Grablje

The Rosemary Cooperative of Velo Grablje was set up in 1892, the first cooperative on Hvar, and the first in Croatia for producers of essential oils. They arranged for the collection and sale of medicinal herbs (rosemary, sage, lavender and heather), and for the production and sale of the essential oil of rosemary. By 1902, the Rosemary Cooperative had 65 members, and was concerned with improving the distillation of the oil. A secondary effort was involved in bee-keeping and the production of honey from the rosemary. A new workshop was built to house new modern boilers and by using modern distillation techniques, they produced a high quality oil. In 1905, a cooperative distillation workshop was also built in the neighbouring village of Malo Grablje. 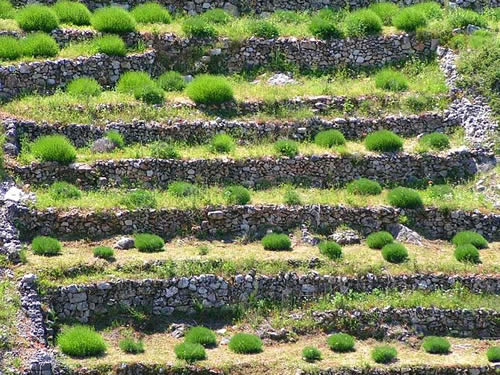 The Rosemary Cooperative gradually expanded into the planting and processing of lavender, for which the island is now famous. Lavender had been cultivated on Vis since 1910, and Hvar farmers were encouraged to try it as a larger-scale enterprise. Lavender fields were planted in 1928 around the villages of Brusje, Velo Grablje, Selca, Sveta Nedjela and Pitve. As it became a popular product, lavender fields began to appear in other areas of the island.

The Lavendar Festival held in Velo Grablje each year commemorates the importance of lavender oil production to the island today. The same area that used to be famous for its rosemary is now lavender scented!

Lavender – the essential souvenir of Hvar!

And what of the lavender and rosemary honey? Along with all the fields of flowering herbs, the island has a strong tradition of producing some extraordinarily good honey! The beekeepers have their own cooperative, which holds a Days of Hvar Island Honey event in Stari Grad each year.

For more pictures and information (in Croatian):